When Quebec’s anti-smoking law was passed in May, an estimated 4,000 cigarette-vending machines were destined for the scrapyard. 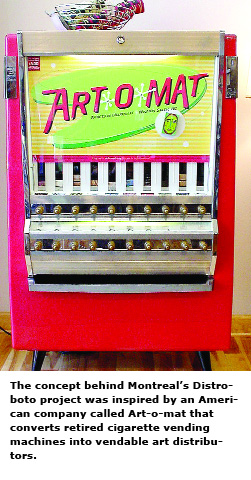 When Quebec’s anti-smoking law was passed in May, an estimated 4,000 cigarette-vending machines were destined for the scrapyard.

In a hasty move to ensure the machines wouldn’t “litter” the streets of Quebec, the provincial government issued letters alluding to the fact that if cigarette machines were so much as present in a bar, restaurant or public place, the owners could be subject to hefty fines.

The government also offered U.S. firm American Iron and Metal a contract and a significant amount of money to help destroy the machines.

And with all that, cigarette-vending operators were forced into a frantic rush to yank and discard of the machines.

Rastelli is the face behind the not-for-profit organization, Distroboto, which retrofits old cigarette machines to hold miniature-sized pieces of locally made art. He keeps the art affordable at two dollars a vend.

By cutting out the middleman, Distroboto benefits local artists who are too often “taken to the cleaners” by other methods of art distribution and consumers who are exposed to a little piece of Canadian culture at a mere two bucks a pop.

Rastelli started in 2001 with a single machine in a friend’s café, and over the years, expanded Distroboto to five machines.

“That’s why I was a bit disappointed by the Quebec government and the way they made it so that operators felt rushed to destroy the machines … because there could be even further expansion of the project. It’s sad to know that literally thousands of these machines have been destroyed,” he said.

When he heard about the ban, Rastelli lobbied the government to fund his project so he could also help the vending operators by paying a fair market price for their machines.

“For them it was a pretty hard hit,” Rastelli said.

Because of the new law, operators lost their stock, their equipment and their investments. The Automatic Cigarette Vending Machine Operators Group and the Canadian Federation of Independent Business publicly demanded the government compensate operators for their losses. But the Ministry stated it had no intention of compensating the businesses.

Rastelli’s expansion proposals were also rejected. Government art councils stated that distribution projects like Distroboto are not eligible for funding.

“They told me outright many times that if I just gave up on having these machines and set up an art gallery and put this stuff on the walls, then we’d get funding.”

Rastelli decided to circulate a press release, hoping operators would choose to sell the machines to Distroboto rather than the junkyard. Keep in mind, he said, this was all during a time of high metal prices, so the option to sell to the scrapyard was understandably taken up by many.

Distroboto has managed to acquire over 100 machines since the ban, including lever-based, wall mounted, and standard, large-sized squat machines. Now it’s a matter of securing storage space and adapting all the different types of machines to accommodate his needs.
“I was lucky to get a lot of parts for coin changers and what were rather valuable parts, well, up until last year.”

Since he launched his venture, Rastelli has learned a lot about the machines – mostly through trial and error, he admits. He said the operators have been great sources of knowledge. Many had the original repair and operating manuals and some of them shared tips and tricks for troubleshooting and transporting the machines.

The one problem Rastelli does have with some of the machines comes from the time when circuit boards were modified to eliminate the two-price option – around the 1990s. He’s looking to some Canadian coin changer manufacturers to help him adapt these older machines and breath some new life into the project.

Currently all of the art, including mini-comics, books, mini-CDs with music and short films, paper dolls and anything that will fit in a cigarette pack-sized package, is priced at two dollars. It’s a price Rastelli says customers are willing to pay, and it’s an expense no one ever complains about.

“I’m still convinced that if someone took the same idea and tried to make millions, it would be very difficult,” said Rastelli.

The volume would be low and the prices would have to be placed too high, he says, especially for something the buyer doesn’t get to hold or inspect before they purchase. He believes people like spending just a few bucks on something original and tangible; something they get to take home.

Rastelli permanently installs Distroboto machines in cafes and bars. Other similar projects like Winnipeg’s ArtHive have brought machines to events like the Winnipeg Folk Festival. The cost and effort to transport and set up a machine for such a short event and other logistical challenges keep Rastelli away from similar festivals and art exhibits.

But as ArtHive’s Angela Forget said, a large, diverse audience that is fairly open to the arts – it seemed like a good place to start.o