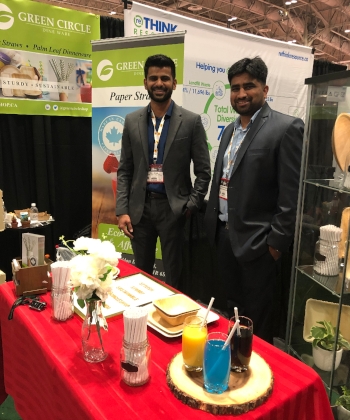 A viral video of a sea turtle with a plastic drinking straw stuck in its nose was the inspiration behind a Canadian office coffee supply and bar supply success story. In July of 2018, Geet Sheth decided to do something about plastic waste: He founded Green Circle Dine Ware, and started making locally sourced, biodegradable paper straws.

Most paper straws are available through distributors overseas, whose health and safety laws may not match up to Canada’s food safety standards. Sheth cautions, “A lot of the paper straws in the market today are not made of food compliant material and can jeopardize our health and safety. That’s one of the biggest concerns. Most of the straws you see in Canada today, I would say 80 per cent of them are coming from overseas, particularly China…they don’t have FDA certification and they’re not biodegradable.”

Sheth adds, “With biodegradable it depends: With the way that the paper is manufactured, that paper may have chlorine in it or the adhesives could have chemicals in it which are not used in Canada that are not regulated overseas.”

The startup began lean, and virtually exploded after he and his business partner, Ravikesh Khadtare opened a booth at the Restaurants Canada Show. Suppliers around Canada and the United States were interested in what this Canadian company had to offer.

Part of its popularity can be attributed to Ontario’s discussion regarding a ban on single-use plastics, following the lead of other countries and cities.

“If you look in the restaurant supply chain industry, a lot of people are substituting foam containers with paper containers and paper cups and such,” states Sheth. “But the one thing that has never been touched was the straw.”

“There has been an exponential demand for straws within North America. There are not many suppliers that produce paper straws in Canada. We wanted to be the first ones in Canada doing so. Being Canadians, we always rely on the United States for a lot of goods like packaging, food packaging and things like that. We said we truly want to be a Canadian company and open something just for the Canadian market.”

Sheth added that he sees his company expanding into the U.S. After receiving a grant from the Government of Canada, the company was able to buy industrial equipment to kick their business into high gear. The factory is in Cambridge Ontario, and the paper is from an Ontario-based paper mill.

“The critical part is that we wanted everything to be compostable and biodegradable and FDA-approved for food contact. That was the key for us. That’s one of the challenges in today’s paper straw market.”

An added advantage he adds, is the considerably lower cost for Canadian consumers. “Tarrifs are one thing, but aside from that, the exchange rate is quite high. If you compare U.S. dollars to Canadian dollars. Right off the bat, you’re paying 30 per cent less when you’re purchasing a product within Canada. Obviously, there’s savings for sure.

What makes Green Circle more interesting, is that the materials are sourced within Ontario, and it’s manufactured within the same province as well.

“Initially it was just a sole proprietorship, under my name, then we formed a corporation. I have a partner now, and we’ve incorporated in October 2018.”

Sheth and his partner Khadtare anticipate more demand for biodegradable straws that last in acidic or hot liquids: “Look at some examples like California, New York State, Chicago; they already banned plastic straws and they’re looking for alternatives. In Canada, Vancouver has banned straws, and in Ontario there’s talk on banning single use plastics.

“I do believe we’re have high demand for what we’re doing,” smiles Sheth.