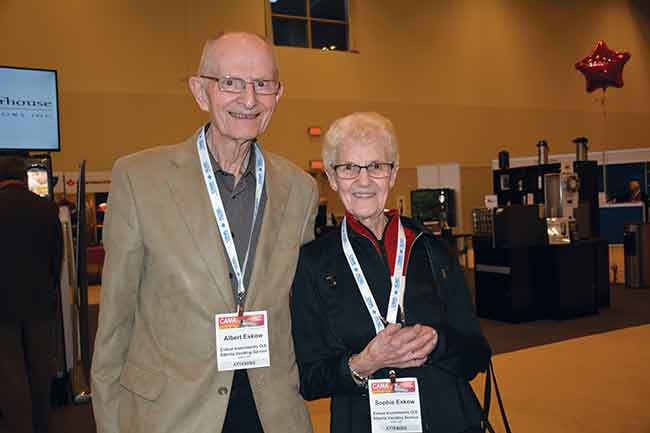 Albert and Sophie Eskow aren’t your typical retirees. Instead of walking the beach and playing golf in sunny Florida, this hard working couple dedicates 12-hour days to their business, Alberta Vending Services, located in Leduc, Alta. Tending to over 400 vending machines in nearby Edmonton and the surrounding area, they drive their route together each day, and say they are happy to be doing the work they love.

The couple bought the business back in 1989, shortly after Albert retired from 26 years at the helm of his automotive parts and industrial supply company. Today, at 77 years old, he isn’t looking to slow down any time soon.

“I hope to do this as long as we can. We’re not in a hurry to retire. We’re at the warehouse at 5 a.m. every day and we leave the warehouse at 5 p.m. It’s a long day, but we like it. It’s the perfect business for an older couple because it keeps you active – you get exercise going up and down the stairs, your mind is working and everything just works better,” says Albert, president of the company.

The business is a true family effort. With Sophie as secretary/treasurer and the couple’s daughter, Cheryl, and son-in-law, Ken Yaremchuk, working the business together, Alberta Vending has seen large-scale growth from its humble beginnings of 12 vending machines.

The changing industry
When Albert first started in vending 27 years ago, the industry landscape was much different than it is today. During the 1990s, beloved brands of soda pop, chips and chocolate were in high demand and consumers enjoyed satisfying their daily sugar cravings with a convenient vending purchase. It was the heyday of vending, before the great push toward healthier options made an appearance. Fast-forward to recent years and the landscape of vending in Canada has changed dramatically.

“The vending business was good until about five years ago when they started asking for healthier choices. We brought out healthier choices but people didn’t really like them because they didn’t taste as good and there wasn’t that much in the bag, in terms of grams. So people began to discontinue eating out of vending machines,” Albert says.

Other vendors that Albert has spoken with say they are experiencing the same problem.

A customer focus
To ensure their business remains successful, the Eskows focus on providing superior customer care to all of their clientele.

“Customer service is very important. It’s also important to give proper service so you don’t have expired dates. Another big thing is to keep your machines nice and clean and tidy. I think that’s probably the most important part of the three things I mentioned,” Albert says. “Being pleasant also goes a long way. Some people think that they’re in business and people have to support them because they’re in business, but it doesn’t quite work that way. You have to have a personality to go along with it.”

In recognition of Albert and Sophie’s dedication to customer service, they were given the 2015 CAMA Customer Service Award at the association’s annual awards ceremony last October, held in conjunction with CAMA Expo 2015 at the Hilton Fallsview Niagara Hotel. The pair accepted the award with a heartfelt speech.

“Sophie and I got the award together. It’s very touching. As a matter of fact, when I had to speak I had tears in my eyes. We really appreciate it. CAMA is a good association and it really helped us grow our business once we joined. They offer great support and getting that certificate renewed every year, when we show that to our customers, they know we’re not a short-term solution. They know we’re here to stay. Not like some of them who get started and then they’re out of the business very quickly.”

Several of the couple’s grandchildren and children were in the audience to cheer them on as they received the honour, adding to the heartwarming moment.

The future of vending
Since the downturn of Canada’s gas and oil industry plunged Alberta into a financial recession, much of the province’s businesses have been affected, including the vending industry. However, Albert remains optimistic about what’s to come, particularly where manufacturers are concerned.

“The future of vending comes down to trying to stay competitive. That’s going to be the hardest part and hopefully the manufacturers will come up with a solution for the healthier choices so there’s more incentive for people to buy from vending machines again. They’re on the right track; they just have to improve what they’re doing,” Albert explains. “The manufacturers make such a difference by helping you with new products. Without manufacturer support, you have no business.”

Alberta Vending Services has built its business on hard work, strong family ties and excellent customer care, staying true to values that are often hard to find in today’s fast-paced world. Albert and Sophie’s dedication to their business and loyalty to their suppliers and customers alike is second to none. Perhaps their most endearing quality is their genuine happiness to be working alongside each other in an industry they love after all of these years.

Julie Fitz-Gerald is a freelance writer based out of Uxbridge, Ont.
Print this page