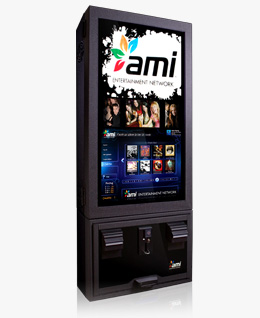 During the show, AMI unveiled the NGX, an all new Rowe-branded jukebox. The NGX was designed to promote effortless serviceability, requiring only one person to install and no tools for common service. Standard, premium and custom skills can easily attach to the face of the jukebox, quickly changing its appearance.

AMI also announced a new partnership with On-Premise Media and Bud Light to bring its Toast or Roast jukebox application online. Toast or Roast enables patrons to create a personalized song that can either play immediately on an AMI jukebox or be e-mailed to a special someone. Customers also have the option of building their song offsite, via Facebook or Bud Light mobile apps, and playing it later on an AMI jukebox. Once a song is created, an e-mail is sent to the person of honour so they can play their personalized Toast or Roast over and over again. Earnings from this application are incremental to the operator and are not shared with the location.

On the game front, AMI debuted two new cash tournaments, including a progressive tournament for their Prize Farm machines. The Prize Farm Progressive Tournament features a prize pool jackpot that increases as new participants log on to play. At the end of each nationwide tournament, five winners will collect a cash prize. Prize farm also offers a second, location-based Instant Tournament, featuring the new hidden object game House of Tiny Treasures, which pays out a cash prize directly from the Prize Farm machine. The new Instant Tournament offers cash prizes of $10, $25, and $50.