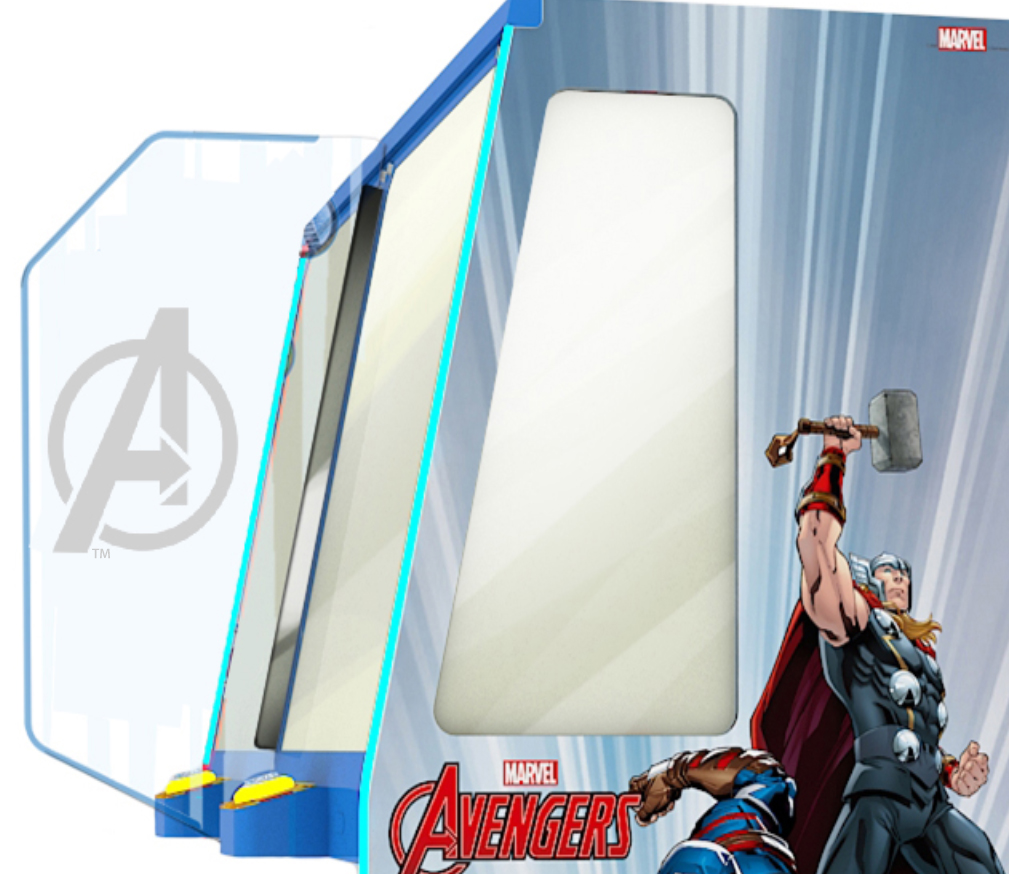 Andamiro USA announced that trials for its new Marvel’s Avengers coin pusher will be ready to begin in late July. Andamiro USA is testing a model with a superhero collectible card series featuring nine Avengers, and another model that operates without cards. Both versions incorporate ticket redemption play and have two player stations.

The Avengers test involves about a dozen games that will evaluate revenue capability, ranking among comparable games and ticket payout percentages, as well as mechanical dependability. Trials will be conducted by distributors and amusement operators in a cross-section of arcade locations across the country.

Avengers is a feature-rich, rapid-fire coin pusher inspired by the Infinity Stones storyline in the “Avengers” movies by Marvel Studios. It is the first arcade game developed under the Andamiro-Disney creative alliance formed in 2019. Players fire tokens at a moving target wheel to win tickets and other rewards, and to populate the pusher playfield. The game’s main objective is to “push” the Infinity Stones, which also reside on the playfield, off the ledge. A Bonus Spin game is enabled when one stone is dropped; the Super Bonus game turns when all six Infinity Stones are collected.

The summer trial of Avengers follows a brief test earlier this year at two locations in southern California which signaled a precedent for success. That test, lasting only two weeks, ended the second week of March when the coronavirus pandemic began to shut down businesses across the country. Avengers was the No. 1 ranking redemption game at one venue, and No. 3 at the other.

“Our initial test, prior to the pandemic, revealed we had a blockbuster game on our hands,” said Andamiro USA president Drew Maniscalco in a press release. “Marvel’s Avengers is one of the world’s most recognizable entertainment properties and Andamiro’s designers really wrapped their minds around the brand to create a brilliant and fun arcade adaptation. This is an exciting game for players, and it’s expected to be very strong earner for operators, so we decided to begin the second trial program during the reopening phases of the American economy. We want to give players something special to come back to.”

It’s well known that Andamiro is the leader in developing games that play with collectible cards, and the company’s Avengers cards are sure to be a big draw to arcades. “So when I was asked by a major customer to test a non-card version, I was very concerned,” Maniscalco said. “But as they say, ‘the customer is always right’ and right they were. The first Avengers non-card game on test ranked at the top of the charts. This game is a double threat and will earn big in both card and non-card locations!”