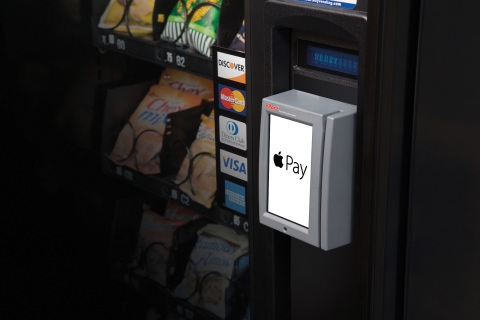 Malvern, Pa. – Consumers are more likely to make a vending machine purchase, and even spend more during the transaction, when Apple Pay is advertised at point of sale, according to a study from a United States-based payment technology provider.

USA Technologies (USAT) released the initial results of its months-long study yesterday, which found that point-of-sale digital advertising of Apple Pay increased overall transactions by 26 per cent, and total machine revenue by 22 per cent.

Consumer awareness campaigns at the point of sale are key to accelerating mobile payments, Maeve McKenna Duska, USAT’s senior vice president of marketing and sales, said in the release.

“Whether an ad at point-of-sale serves as a simple reminder that a consumer can use Apple Pay to make a purchase, or educates and informs them of how easy, secure and private the mobile payments service is, consumers are responding positively as they buy more and spend more, more often,” Duska said.

“We believe the unattended markets we serve will continue to drive Apple Pay use,” Duska said.