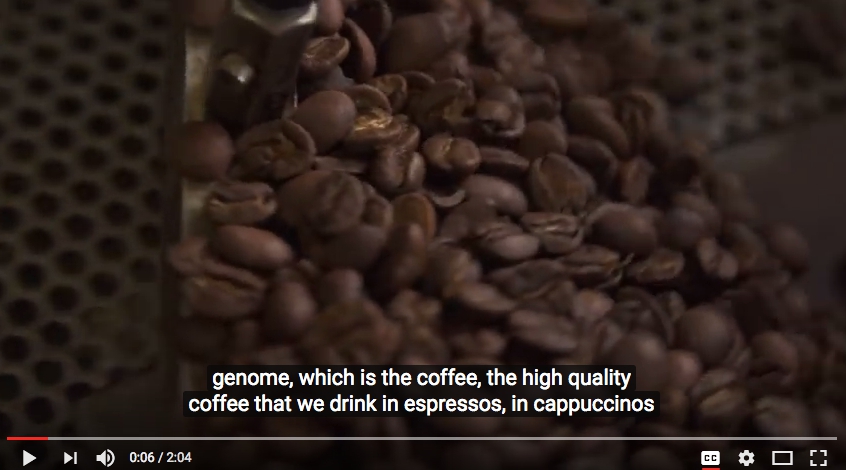 Davis, CA – The first public genome sequence for Coffea arabica, the species responsible for more than 70 per cent of global coffee production, was released Jan. 13 by researchers at the University of California, Davis.

Funding for the sequencing was provided by Suntory group, an international food and beverage company based in Tokyo.

Now available for immediate use by scientists and plant breeders around the world, the new genome sequence has been posted to Phytozome.net, the public database for comparative plant genomics coordinated by the U.S. Department of Energy’s Joint Genome Institute.

Details of the sequence were presented Sunday, Jan. 15, at the International Plant and Animal Genome Conference in San Diego.

Sequencing of the C. arabica genome is particularly meaningful for California, where coffee plants are being grown commercially for the first time in the continental United States and a specialty-coffee industry is emerging, UC Davis said in a news release.

“This new genome sequence for Coffea arabica contains information crucial for developing high-quality, disease-resistant coffee varieties that can adapt to the climate changes that are expected to threaten global coffee production in the next 30 years,” said Juan Medrano, a geneticist in the UC Davis College of Agricultural and Environmental Sciences and co-researcher on the sequencing effort.

“We hope that the C. arabica sequence will eventually benefit everyone involved with coffee — from coffee farmers, whose livelihoods are threatened by devastating diseases like coffee leaf rust, to coffee processors and consumers around the world,” he said.

The sequencing was conducted through a collaboration between Medrano, plant scientists Allen Van Deynze and Dario Cantu, and postdoctoral research scholar Amanda Hulse-Kemp, all from UC Davis.

In 2014, researchers elsewhere sequenced the genome of Coffea canephora – commonly known as robusta coffee and used for making coffee blends and instant coffee. There has been, however, no publicly accessible genome sequence for the higher-value and more genetically complex C. arabica.

Medrano was intrigued with the challenge to sequence C. arabica, but as an animal geneticist was experienced in the genomics of livestock – not crops.

Undeterred, he quickly tapped the expertise of molecular breeder Van Deynze, director of research at the UC Davis Seed Biotechnology Center and associate director of the UC Davis Plant Breeding Center, as well as Cantu, a plant geneticist in the UC Davis Department of Viticulture and Enology.

Coffee is a tropical crop, traditionally grown around the world in a geographic belt that extends no more than 25 degrees north or south of the equator. But at Ruskey’s Central Coast farm, coffee trees are producing high-quality coffee beans at a latitude about 19 degrees north of any other commercial coffee plantations.

Ruskey also has planted coffee trees on some 20 other farms stretching from San Luis Obispo south to San Diego, launching what he believes will become a new specialty-coffee industry for California.

Working with Ruskey, the UC Davis researchers collected genetic material – DNA and RNA samples – from different tissues and developmental stages of 23 Geisha coffee trees growing at Good Land Organics. Geisha, known for its unique aromatic qualities, is a high-value C. arabica variety that originated in the mountains of western Ethiopia.

Plant material from one of the trees – UCG-17 Geisha – was used for developing the C. arabica genome sequence.

Genetic secrets revealed in Geisha variety
Using sequencing technology developed by Pacific Biosciences of Menlo Park, California, the UC Davis researchers estimated that UCG-17 Geisha has a genome made up of 1.19 billion base pairs – about one-third that of the human genome.

The study used a combination of the latest technologies for genome sequencing and genome assembly from Dovetail Genomics of Santa Cruz, California, revealing an estimated 70,830 predicted genes.

Going forward, the researchers will focus on identifying genes and molecular pathways associated with coffee quality, in hopes that these will provide a better understanding of the flavour profiles of Geisha coffee.

They have sequenced samples from 22 other Geisha coffee trees to obtain a glimpse of the genetic variation within that variety and among 13 other C. arabica varieties, which will also be important for developing plants that can resist disease and cope with other environmental stresses.

Genome sequencing crucial for global industry
Jose Kawashima, president and CEO of Mi Cafeto Co. Ltd. in Tokyo, a leading specialty coffee company in Japan, stressed the importance of the discovery for all levels of global coffee production.

“Having worked in the coffee industry for over 40 years and visited coffee farms around the world, I have never witnessed as many quality C. arabica coffee farms under duress due to deteriorating social issues and the impacts of climate change,” said Kawashima, who was not directly involved in the genome sequencing effort.

“Therefore, it is urgent that this scientific discovery be used to implement practical improvements at the farm level to sustain the future of the coffee industry,” Kawashima said. “If sustainability can be achieved at the coffee producer level, then coffee lovers in consuming countries can continue to enjoy quality coffee.”

Sequencing effort funded by Suntory
Funding for the sequencing project was provided by the Suntory group, through its Suntory Global Innovation Center Limited, located in Kyoto, Japan.

The C. arabica sequencing was of particular interest for the Suntory group, whose many brands include coffee drinks, marketed in Japan.

“The Suntory Group will continue its research and development efforts to identify formulas and raw materials for creating coffee beverages that have higher added value, with a focus on safety, security and good taste,” Tanaka said.