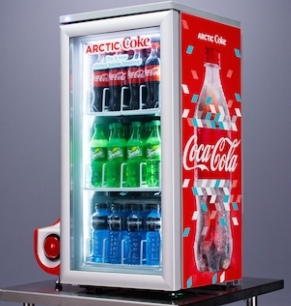 Coca-Cola had launched a pilot earlier this year to test an innovative take on slushies that customers can make themselves.

The “Arctic Coke” machine turns extra-cold bottled soft drinks into a slushy in a matter of seconds, and The Coca-Cola company is testing about 800 of the units in convenience stores across the United States.

Customers select their 500ml bottle of choice from the Arctic Coke cooler, which keeps the beverages at a temperature just below freezing, and places it on a platform. The special cooler holds 70 bottles, which are chilled to minus1 degree Celsius, compared to the traditional 7 degrees of a regular cooler.

The machine then vibrates the bottle, shaking it so that ice crystals form. The unit is backlit, so the transformation from liquid to slushy is visible.

“Consumers find it both fun and innovative,” said Kim Drucker, director of platform innovation, Coca-Cola North America in a press release. “They’re drawn in by the fact that they can be part of the transformation process. And what brings them back is the fact that the drink they just helped make stays colder for longer. The promise of having an icy-cold Coke from the first sip to the last sip really resonates.”

“The ability to create a super-cold, nearly frozen Coke is one of those things we’ve always tried to figure out,” said Jeff Busch, director of equipment commercialization for Coca-Cola in a press release. “It’s a target we’ve just kept in our sights.” He added, “This test will be a great way to learn if Arctic Coke is something we can adopt for wider use.”

The pilot currently includes Coca-Cola, Diet Coke, Sprite and Powerade Mountain Blast. Cherry Coke, Fanta Orange and Mello Yello will soon be added in select outlets, and the team is continuously evaluating other brands. There is no mention at this time if or when Arctic Coke will be available in Canada.