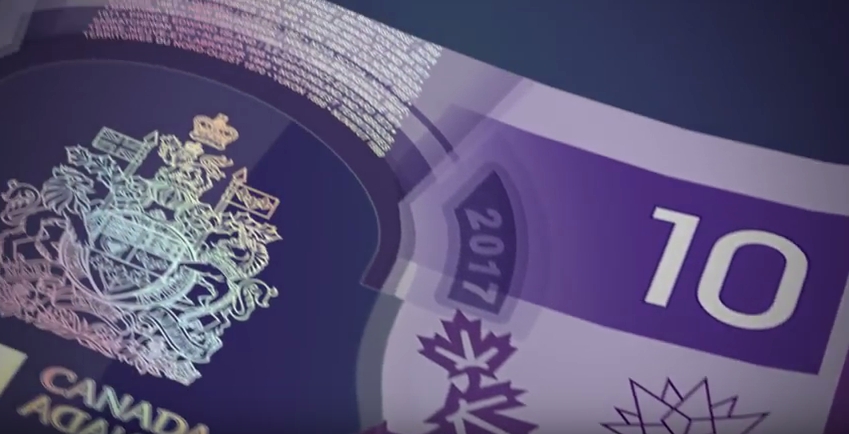 The Bank of Canada's $10 bank note commemorating the 150th anniversary of Confederation will enter into circulation on June 1.

Ottawa – The Bank of Canada has unveiled a commemorative $10 bank note celebrating the 150th anniversary of Confederation and showcasing the country’s history, land and culture.

This special note was revealed during a ceremony at the Bank of Canada’s head office in Ottawa by Governor Stephen S. Poloz and parliamentary secretary to the Minister of Finance Ginette Petitpas Taylor.

It will enter into circulation on June 1, the Bank said in a news release.

“This bank note is intended to captivate our imagination and instill pride in what we, as a nation, have accomplished,” said Poloz. “It celebrates the natural beauty and majesty of our land and some of the important parliamentarians who helped shape our great country.”

Four individuals are portrayed on the front of a Canadian bank note: Sir John A. Macdonald, Sir George-Étienne Cartier, Agnes Macphail and James Gladstone or Akay-na-muka – his Blackfoot name.

Upon circulation, the commemorative note will mark the first time that a Canadian woman and an Indigenous Canadian are depicted as portrait subjects on a Bank of Canada bank note. The design also incorporates Inuit and Metis cultural elements: a colourful reproduction of the artwork Owl’s Bouquet by world-renowned Inuit artist Kenojuak Ashevak; and the distinctive arrow sash pattern, an important symbol of the Métis nation.

The commemorative $10 note also has new security features including a colour-shifting arch depicting an arch found in the Memorial Chamber on Parliament Hill and three-dimensional maple leaves.

A comprehensive consultation process was undertaken by the Bank to ensure that this commemorative bank note reflects the input of Canadians. The ideas and suggestions received through public opinion research, consultation and focus groups influenced the note’s content and have been carefully incorporated into the design.

Starting in June, the Bank of Canada will issue 40 million of these commemorative bank notes and distribute them through financial institutions to be broadly available across Canada by 1 July.

The Canada 150 note will circulate alongside the current Polymerseries $10 note, but it does not replace it. Both the current $10 note and the commemorative $10 note are of equal value and can be used interchangeably in transactions.