The race for the ready-to-drink hot beverage market is on. Coca-Cola
might have made it out of the gate first in 2006 with its new Far Coast
brand of brewed beverages. But the tag team of Starbucks and PepsiCo is
gearing up for contention in 07.

The race for the ready-to-drink hot beverage market is on. Coca-Cola might have made it out of the gate first in 2006 with its new Far Coast brand of brewed beverages. But the tag team of Starbucks and PepsiCo is gearing up for contention in 07.

Leading the charge is Gerry Lopez, president of Global Consumer Products Group, who announced in early October that through its joint venture with PepsiCo, Starbucks aims to “transform” coffee vending with its plan to offer beverages through the new Starbucks hot vending initiative.

The announcement comes just weeks after Coca-Cola opened its first “concept store” in Toronto, a marketing device intended to build the relationship between the Far Coast coffee brand and consumers, and to ultimately drive consumers to the retail outlets that will be serving up the new java.

And although Coca-Cola has chosen premium restaurants, entertainment venues and other high-end outlets for its Far Coast brand and convenience stores and quick-serve restaurants for its “on the go” brand, Chaqwa, the company still has its eyes on the office coffee service market.

“Right now, (Far Coast and Chaqwa) is for retail and foodservice. But we’re always looking for long term, so there is the potential for office coffee service,” said Stephanie Baxter, senior manager of corporate communication for Coca-Cola Canada.

Coca-Cola has no plans to enter the office coffee service market in the next year, said Baxter. However, she reiterated, there’s always a possibility. 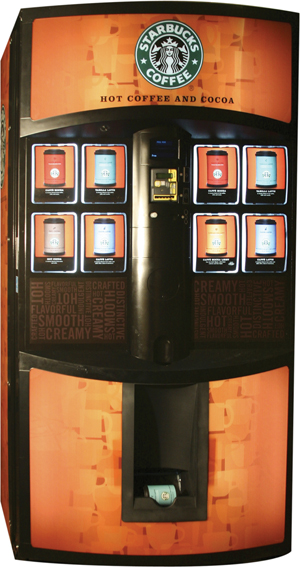 Starbucks, on the other hand, has had its hands in the OCS cookie jar for some time now. And it plans on taking its share of the ready-to-drink beverage category to new heights with its proprietary Starbucks vending platform.

Developed by PepsiCo, the Starbucks hot beverage machine utilizes proprietary heat-on-demand technology and proprietary packaging. Each hot beverage will come in a convenient nine fluid-ounce recyclable steel can with an insulating label, designed to keep the beverage warm, and still comfortable to the touch.

Starbucks hopes its new hot beverage vending machine will remedy the problems it says are associated with existing coffee vending, including lack of consistency and issues with messy, hot-to-hold cups.

Through the Starbucks hot vending initiative, the company says it is aiming to transform the hot coffee vending
experience by putting its already-famous “Starbucks experience” stamp on the industry.

“Starbucks continually looks for meaningful ways to extend the Starbucks Experience beyond the walls of its stores,” Lopez said.

“With the introduction of these transformative hot vending machines, our customers can enjoy the same high-quality beverages that they expect from Starbucks in a way that is customized to the needs of their fast-paced lifestyles.”
Each Starbucks vendor will allow customers to pay with cash, a Starbucks card, or with a major credit card such as Mastercard, Visa or American Express.

Coca-Cola has developed a proprietary pod-based brewing technology that is also claimed to be “revolutionary.” But those in the OCS industry already have their doubts.

“I understand it’s a pod machine, so right off the bat, anyone in OCS will say there’s going to be a ton of equipment issues,” Brian Martell of Heritage Coffee Co. predicted at the Ontario Coffee and Vending Service Association annual conference in Niagara Falls this September.

“It’ll be interesting to see how it all plays out,” said Martell, who added it’s a very “gutsy” move for Coca-Cola, one that presumably cost the company a bundle.

“It’s the service that interests me,” added Frito Lay’s Brad Moffat. Whether or not large players like Coca-Cola and Starbucks can offer the level of service a dedicated OCS operator could is still yet to be determined.

President of the Coffee Association of Canada, Sandy McApline, commented that Coca-Cola’s aim is to develop a sort-of drink fountain design that makes it very simple for foodservice operators to offer a variety of hot beverages.

“This innovation is designed to help the company’s customers overcome operational difficulties such as complex, unreliable machines and high-labour turnover,” Coca-Cola said in a recent press release.

Through the technology, retail customers can quickly and conveniently tap into the fast growing specialty coffee market while receiving marketing and technical support from the Coca-Cola Company, the statement continued.

Whether they’re in an office, foodservice or convenience store location, single-serve and ready-to-drink hot beverage technologies are only as good as the service that backs them up. In the end, it’s the provider with the most reliable service that will take the race.