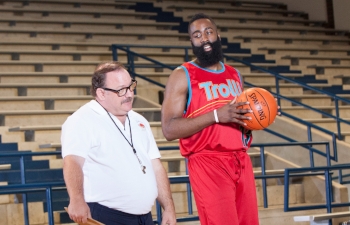 “In this new digital series, Trolli joins James in his familiar territory, on the basketball court. Fans will get to enjoy a peek inside James’ world and discover what fuels his killer basketball skills,” said Jill Manchester, SVP Marketing and Brand Strategy, Ferrara Candy Company in a press release.

“This new content is the perfect way to continue to reach our dedicated fans and introduce Trolli to new fans while spotlighting our Beardly Awesome brand ambassador.”

As the opening title pops up and the music begins, the viewer joins James and Coach Carl discussing their views on basketball fundamentals. James tries to play it cool and show his unique basketball skills while dealing with an overly excited coach figure.

Fans will have to watch the entire series, which include three 60-second videos, to see James demonstrate how to do a layup, slam dunk, and hook shot, but the lessons don’t stop there. As the clinic coach slows down each play, we begin to learn where this star basketball player really gets his “Sour Brite” mojo. For even more entertainment, stay tuned for the extra clips during the rolling credits.

The videos will be released throughout the week on Trolli’s social channels and be distributed through YouTube. Fans will also have the chance to participate in exclusive contests on Trolli’s Twitter and Instagram channels by following, re-tweeting and using the #WinningatHoops when entering.

“Trolli and James are Weirdly Awesome and never do anything considered ordinary, so our sweepstakes prizes couldn’t be ordinary either,” continued Manchester. “We’re upping our game and giving our Trolli Squad the chance to win one of a kind prizes they can’t get anywhere else on the planet: the custom made Trolli basketball jersey James wore during the making of the episodes, autographed by the basketball star himself and the actual Trolli-filled zipper basketball featured in the video series, also signed by James. Now that’s Weirdly Awesome.”

Winners of the giveaways will be announced via Trolli’s Twitter and Instagram.
Visit WeirdlyAwesome.com/Giveaways for more information and details on how to enter.