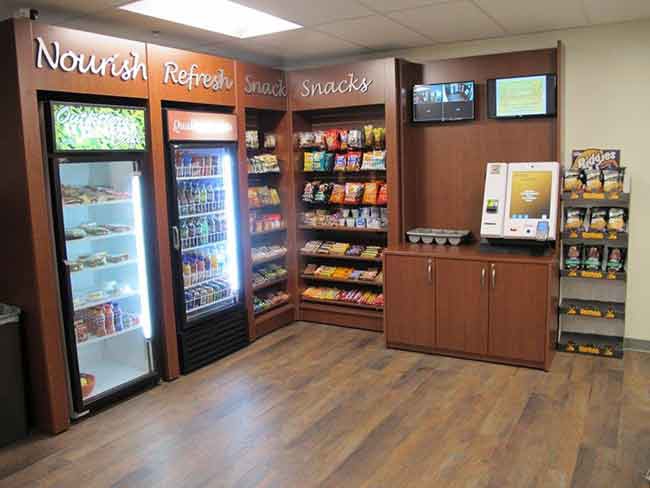 In 2012, Jim Jackson stepped into the wrong elevator in a Las Vegas hotel. In hindsight, it turned out to be the right one after all.

Jackson, who is the general manager of Quality Vending & Coffee Services, was in Vegas for the annual NAMA show. He had just attended a presentation on micro markets and wasn’t sure what to make of the concept of a non-attended, self-serve convenience store with a focus on healthy and nutritional food options.

Everyone in the group was sitting there and thinking, “you know what, guys, this is out of our comfort zone; we are ‘Vending People’,” he says. It was getting late and time to adjourn and for supper. He was heading back to his hotel room to get ready for dinner and mistakenly stepped into the wrong elevator, taking him to the wrong tower of the hotel. He recognized a gentleman in the elevator as being a NAMA attendee and struck up conversation by asking him if he was an exhibitor or an operator. The man identified himself as an operator in the Phoenix area and Jackson identified himself as an operator from Winnipeg.

The man’s next question took Jackson by surprise: “Are you doing micro markets?”

Jackson, seeing the irony in having just attended a presentation on the subject, replied that they seemed interesting but no, he was not. The man shared that he operated about 20 micro markets in the Phoenix area and encouraged Jackson to take a serious look at the concept. Jackson said he would consider it.

This is the point where things went a bit “Vegas” and Jackson’s fortunes took a real turn. The conversation continued and he learned that one of the man’s micro market locations had its head office somewhere in Canada but he wasn’t sure where. Jackson asked for the name of that location and it turned out to be Winnipeg-based Price Industries. Upon getting back home Jackson contacted Price Industries and was given a contact person who said she was quite familiar with the micro market concept, as they had one in their Phoenix operation and were keen to have one in Winnipeg. The two agreed to work together and in the fall of 2012, Price Industries became Quality Vending’s first micro-market account. This made Quality Vending an early adopter of micro markets in Canada.

“So if I wouldn’t have stepped into the wrong elevator, would I be doing them today? Maybe, maybe not. It was some Vegas luck that got me involved and becoming a leader in providing micro markets in Canada long before other operators even knew what they were.”

Once Jackson got his first micro market up and running, he clearly saw the void in the food service industry that a micro market would fill. As food service operators struggled to manage cafeterias in locations that could no longer support a traditional cafeteria service, their customers were left with few food options other than a vending “cold food” machine that has perception issues and product limitations. The concept of a healthy deli-style marketplace became a very appealing option to them.

Jackson said Quality Vending focuses on delivering customers a superior selection of fresh food options while maintaining a commitment to providing good value. He uses a local catering company that has a great reputation in Winnipeg for delivering quality products. Every week he brings in “specials” from other local restaurants to supplement the traditional deli offerings. This could be anything from sushi to Italian pasta dishes. It is important to keep introducing new products that are over and above the usual soup/sandwich/salad selections, he says. You want to keep your micro market exciting and keep your customers coming back for more.

“As long as an operator is willing to devote the time and energy into managing micro markets, good opportunities do exist. But I want to make it clear that, for many reasons, they are a lot of work and require devotion by the operator to be successful. Over 40 per cent of your sales will be in the fresh food category and this is a number that vending operators are not excited about. You have to keep in mind that a micro market is not a vending machine and you need to treat them as a separate segment of your business and manage accordingly. You are now a food service provider so you really need to be diligent with service frequencies and managing perishables if you want to be successful.”

Quality Vending now has six micro markets in operation with several more in the works. Typically, once an installation is complete, a Quality Vending micro market manager will be on site for the first couple of days to familiarize customers with setting up accounts and the general operation of the pay station. Quality Vending will also train a designated customer representative to be the point person to handle this task as new employees are introduced to the system. When Quality Vending first introduced micro markets, a customer needed to set up an account, fund the account and then use the account for purchasing. After working with a U.S.-based manufacturer and a Canadian payment processor, all of Quality Vending’s micro markets are now Canadian compliant to accept debit and credit cards as a form of payment.

“This is huge for us as 60 to 70 per cent of our transactions are now coming via debit and credit.”

Building the micro market business
Quality Vending & Coffee Services has a 40-year history in the industry, a span Jackson shares, as he has been in the business since the company’s inception in 1977. Being a larger operator, Jackson has staff that he can devote to growing this relatively new micro market segment of the business. In the beginning he integrated servicing the micro markets into their vending routes. Now, with six markets to care for, he has modified the integration and has a full-time person dedicated to merchandising and managing them.

“Logistically only a couple of micro markets cannot support a full-time person to manage them. When we put out our fifth and sixth at the beginning of this year, we could now dedicate a full-time employee to managing and marketing them. This took us to the next step in providing the highest level of service that our company is known for.”

Top 3 tips for success
Firstly, “Don’t do just one of them to be reactive. If you do not intend on growing that part of your business then don’t get involved in the first one. Logistically you need volume to get good food suppliers on board with you. If you just order 12 sandwiches a day, then you are not a priority to your suppliers, but when you start ordering 80 to 100 sandwiches a day, then you become a valued customer. Remember 40-plus per cent of your sales will be fresh food, so this is important.”

Secondly, ensure that you have the resources and are willing to dedicate the time to doing it right. “Micro markets are time-consuming and high maintenance. You have to be prepared to invest in them with resources – financially, but more importantly, time resources.”

Lastly, “look for the right locations that will meet your business parameters.” For Jackson, those parameters start around 200 employees, preferably in an office type environment. Now, Jackson says not to rule out other opportunities, as they all have different logistics surrounding them and you may be able to operate a successful micro market in smaller locations.

Jackson believes micro markets are still in their infancy in Canada and are only starting to get the attention they deserve. For the first time in 2015, CAMA had representation from four micro market providers at its annual convention.

“I believe that micro markets will play an important role in providing growth to an industry that has seen some difficult times. In most cases it will be a vending operator that gets involved in providing micro markets but they are definitely not restricted to just the vending industry.”

In closing, he says, “We see micro markets as an exciting growth opportunity for Quality Vending & Coffee Services!”