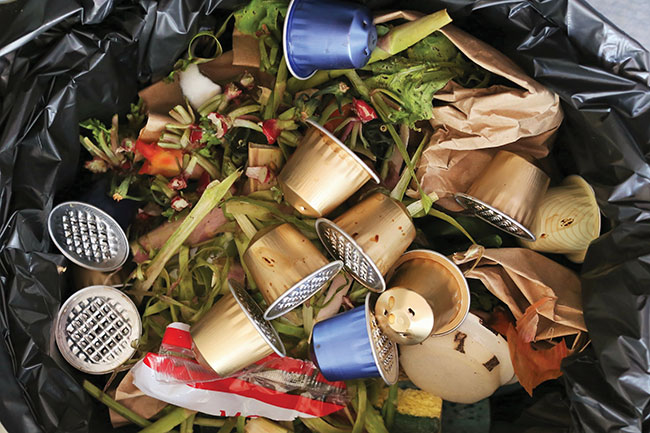 Nestlé is among one of the Food Waste Coalition members aiming to reduce food waste. Photo: © machiavel007 / Adobe Stock

Food waste is a growing issue in the food and beverage industry. As sustainability has become more of a priority for CPG companies and consumers who purchase their products, many businesses are looking for ways to reduce their waste. The new coalition will push companies to be forthright about how much they are actually wasting and then work together to find innovative ways to reduce it. The initial members include CPGs such as General Mills, Kellogg Company, Barilla, McCain Foods and Nestlé.

“Food loss is a serious global problem and it can only be effectively addressed through committed collective action,” said Ignacio Gavilan, director of environmental sustainability at the Consumer Goods Forum, in a statement. The coalition also is creating regional working groups to push for more local implementation. The members will need to report their food loss data by 2021, expand the collaboration beyond the coalition by engaging with their suppliers and address food waste at the post-harvest stage where 30 per cent of it is created.

With food waste a global issue, it will take commitments from these and other companies to cut in half food loss per capita. About one-third of food produced goes to waste, which totals about 1.3 billion tons annually, according to data from the United Nations. The organization also estimated food waste adds about 3.3 billion tons of greenhouse gases into the atmosphere each year. The Consumer Goods Forum, which is a network of 400 of the biggest consumer goods companies across 70 countries, said that equates to a roughly $940 billion cost to the global economy.

The coalition will utilize the Consumer Goods Forum’s five years of experience working on the issue, according to the release. These retailers and manufacturers have joined forces before for an initiative so that could help with the newest initiative. In 2017, the forum asked companies to simplify food date labels by 2020. Labels like sell by, use by, display until and best before created confusion that cost consumers up to $29 billion per year in the U.S., according to the forum. The call to action was aimed at addressing that.

Many in the food industry are turning to upcycling as a solution for food waste, which could be something more members of the coalition use. A Future Market Insights study found food waste is a growing business worth $46.7 billion in 2019 with an expected annual growth rate of 5 per cent for the next 10 years. This is a lucrative opportunity for CPGs to repurpose their food waste into packaging and upcycled food, which many startups are already doing. It also appeals to the growing consumer base that considers sustainability in their purchases.

This isn’t the only new group working toward sustainable goals for food waste in the industry. Earlier this year, the Upcycled Food Association created a task force of academic, nonprofit and industry leaders who released the first official definition for “upcycled food.” The group said a single definition could push more food companies to use ingredients that reduce food waste.

If the Consumer Goods Forum is able to get retailers and manufacturers to share all of their data on food loss publicly and collaborate to find more effective and innovative ways to reduce waste, then it could make a tangible impact on the industry. It could also encourage scores of other food, beverage and retail companies from around the world to join the coalition, further increasing its effectiveness. o