How a butcher used vending machines to increase revenue. 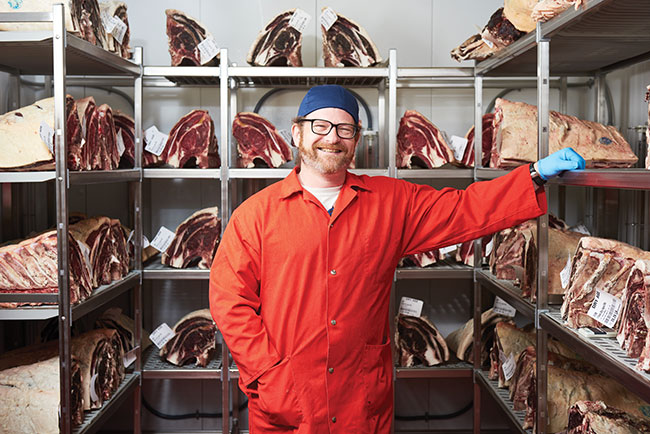 In the world of automated sales, the average vendor wouldn’t see a connection between artisanal butchers and vending machines. However, a butcher located in New York State found a way to reach clients who couldn’t come by his shop during regular business hours. Joshua Applestone’s vending machines that sold frozen cuts of fine meat also had the advantage of promoting his company, and created new clients by piquing their curiosity, then serving them innovatively.

As a result, Applestone Meat Company is not your every day butcher shop. For starters, it’s not a shop, but an automat that can be accessed 24/7. This format gives those who work shifts or late hours a chance to buy cuts of organic and sustainably raised meat without running out during a lunchtime or navigating traffic during rush hour.

“My wife Jessica and I opened our previous business, Fleisher’s, with the goal of providing access to to fresh, sustainably raised meat. Since then, as people have become more and more educated about the origins of their meat, custom-cut shops have opened across the country.

“With Applestone Meat Company, I wanted to tackle two new challenges: accessibility and affordability. Our shops are open 24/7 — customers can stop by whenever works for them and purchase fresh cut meat from vending machines. Buying well-raised meat shouldn’t be intimidating—we want to create an approachable environment for customers.”

Applestone says that the original idea of the supermarket has been “lost on small businesses like butcher shops. “The old model was based on selling larger quantities of meat with smaller mark-ups. Small places don’t have the capacity to do such volumes of sales so they have to rely on larger mark-ups. They also happen to be the buyers of high quality products from smaller farms. At the end of the day, people have to be able to afford well-raised meat; pricing that is only affordable to wealthy customers misses the mark. We need to be able to cater to all different types of people.

The answer to that problem was a simple one: Vending machines. The unlikely marriage of technology and small farming communities in his area helped both consumers get hormone-free meat. The vendors also let his company expand without committing to high costs of staff and real-estate to open a chain.

“I wanted to empower farmers by giving them a variety of products to sell directly on their farms. If a farmer could take their animals and turn them into higher value items such as sausages, hot dogs, and cold cuts, they could turn more of a profit,” stated Applestone. “However, early on, people kept knocking on the door asking for retail cuts. Not farmers, but locals who wanted products because of my experience and reputation from Fleisher’s. It was just two of us in the whole place and it was quite difficult to get anything done because of repeated interactions with potential customers.”

It was a trip through memory lane (in his case, memories of Manhattan) that inspired a way to bridge both the need for affordable cuts and the ability to reach more clients. Looking back on his visits to the famous automat at Horn & Hadart with his mother, he realized that he had a way to automate access to good food for his clients. 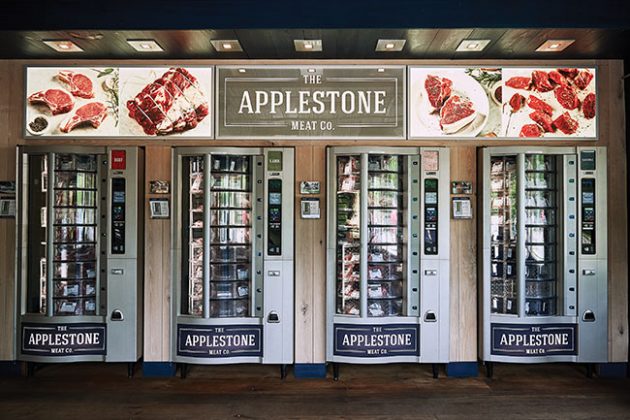 “To me, it was a magical place where food came out on plates and bowls from a machine. It was all coin operated. You put some money in to a slot, pulled out a bowl of baked beans, and sat down to eat it right there.

“At this point it just clicked: the idea of a self-serve shopping area. It’s not that we didn’t want to talk to people at Applestone, but that people didn’t really want to talk to us. A lot of our customers want to run in, get what they want, and get home. Plain and simple: People live busy, complex lives. We realized that a 24/7 self-service butcher shop would be a huge convenience to people everywhere.”

The question that remained was, should he get machines custom made, or retrofitted? Applestone’s currently uses existing machines that are retrofitted for meat vending. “They have been a great tool to test the market and get feedback from customers,” stated Applestone. “This model of refrigerated vending machine typically houses sandwiches or other prepared foods so it is spacious enough to hold individually packaged cuts of meat.”

Applestone stated that their initial locations were based “out of necessity.” “I installed the first machines inside the building where we were processing our meat in Accord, New York,” said Applestone. “Our second store was built in Stone Ridge (the community where I live) and it has a dedicated retail storefront for the machines. It houses five machines, each one dedicated to a specific type of product: beef, pork, lamb, chicken, and sausages. Customers can browse the meat selection in each machine before swiping their credit card to purchase.

Vending machines are just one aspect of the company’s retail model. Each Applestone Meat Company store also has a service window with an attendant on-site, so guests can choose to buy straight from the machines or interact with their staff to receive advice on specific cuts and how to cook them as well as ask for any items not currently in the machines. “Our guests can choose to have as little or as much interaction with us as they would like, or can come in and shop at any point in the day or night.” Perfect for an anti-social customer, or the introverted client who would rather make their purchases without chitchat.

When the Applestone Meat Company initially started the business, they were solely planning to process meat for local farmers. However, having only two employees meant that more orders would put a strain on finances and schedules when they started to expand. “Once people started knocking on our door asking to purchase meat directly from us, we installed the machines…it wasn’t until we saw that customers really responded to the ability to purchase meat from us 24 hours a day that we built the business around a new retail model that incorporated the vending machines.”

The machines were a boost to business in the most unexpected way. As Applestone’s company evolved, he realized that his company was originally designed with a focus on butchery and processing, as opposed to being a retail butcher shop.

“The vending machines were really a shift in our entire model. The model allows us to build a robust team of butchers as well as to hire retail support staff who man our service window and interact with customers during the hours of 11 am – 6 pm. The vending machines further allow people the flexibility as to how much interaction they choose with have with us when they come in, as well as the opportunity to shop 24 hour a day.”

While New York is arguably the home of the automat, it Applestone admits that it “always takes time for people to adjust to change.” He added that once people come in and use the machines once, he reports seeing the same users come back again and again. “It’s been really encouraging to see people old and young, families and weekenders, all coming by to use the machines.”

The popularity of the Applestone Meat Company vending machines is not without its challenges. “The biggest obstacle is that existing machines aren’t really set up for what we are doing, so we are building the new machines ourselves.” Applestone’s entrepreneurial spirit is looking at his company’s needs and the machine’s capabilities as an opportunity: “There are lots of features we plan to change. I can’t go into too many details yet, but I can say that we are focused on increasing our inventory capacity inside of the machines as well as improving ease of use for both employees and customers.”

In all, Applestone and his employees don’t see a lot of complaints regarding either the cuts of meat nor the machines. “At the end of the day, the most important aspect of what we do is making sure that our customers know that all of the meat we source comes from animals raised without added hormones or antibiotics by farmers who are committed to their well-being. We happen to sell this meat using a retail model that is supported by vending machines and our customer service window.

“We continue to highlight the fact that we stock the machines fresh daily, just like a butcher case, and that each machine is temperature regulated so that we can receive real time updates to then monitor accordingly.”

The newest Applestone store will open in Hudson later this year and a location in Westchester will soon follow. After these openings, the company will begin exploring options in New York City.