Manuel E. Parreira of the Bank of Canada spoke at the CAMA convention last October. 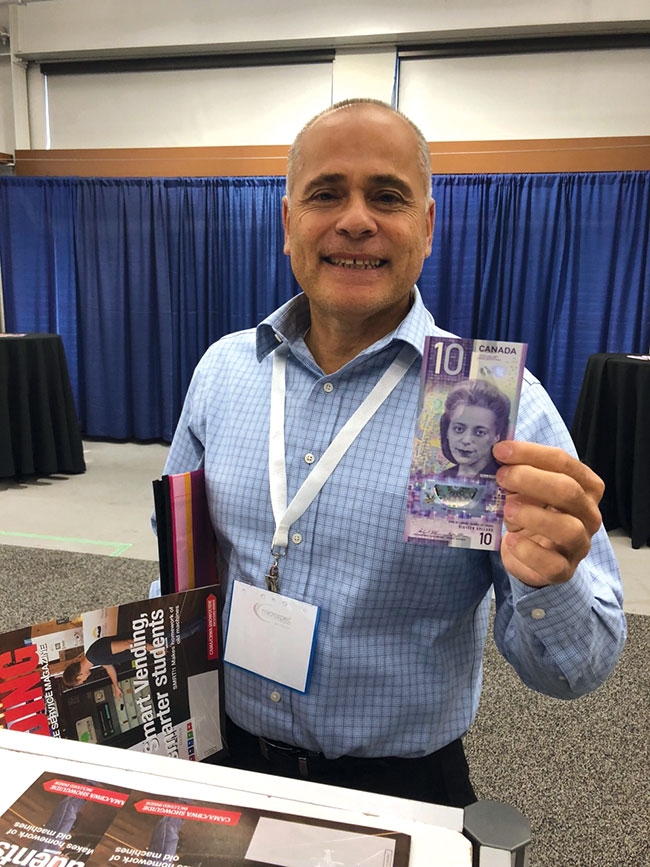 Maneul E. Parreira, Regional Director at the Ontario Regional Office of the Bank of Canada.

Manuel E. Parreira of the Bank of Canada spoke at the CAMA convention last October.  “In terms of money…we continue to see an increase of cash usage around 3 to 5 per cent every year. So that hasn’t changed. What we have seen change is the actual type of payments; we’re seeing more debit, more credit, more global markets are taking that market share.”

One of the largest changes that the Bank of Canada has seen were the advances in household printers. He’s expressed concern how the potential for counterfeiting bills could theoretically become easier as office supplies improve..

“A lot of central banks had to change the way they’ve issued money,” added Parreira. “So, we change the look of bills every seven to ten years, now.” The way that bills are distributed also affects how technology will be accepting certain bills: The Minister of Finance will discuss changes to the limitations of “legal tender” in March, he adds.

“They are looking at removing the ‘legal tender’ off the one, the two, the twenty-five dollar and the five hundred dollar bill and the thousand dollar bill.” He explains, stating that it may not involve cashless payments or the vending industry directly.  “Because [vending is] a cash business, the idea is that the bills that get passed this year, those can’t get used in a retail transaction.

“The two dollar bill is still worth two dollars; what will happen if that bill goes through [a vending machine] is that it can not be used in a transaction. Typically, what most people will have to do is send it to the bank, and the bank will then reimburse them for that.”

Out of all the changes that the Bank has undergone, he is most proud of the face on the new ten-dollar bill.

Parreira described the process that forged the first non-royal and non-white woman to be the face of the ten dollar bill. “Canadians made a decision, they ranked a top ten [list of Canadian notable persons] and from that list, we had a special committee that decided on the top five, and the Ministry of Finance made the final verdict Viola Desmond would be on the bank note.”

“Viola Desmond is the Rosa Parks of Canada. Rosa parks sat on the bus, got kicked off. Viola did the same thing in a theater in the Halifax area. The difference is, Viola did it nine years before Rosa Parks. So she did it long before Rosa Parks, but we’ve never acknowledged it.

“So, this is one of the ways that we want to acknowledge someone who made a difference in Canada. She is a champion of social justice and a defender of human rights. That’s something not a lot of people in Canada know.”

Parreira notes that vertical notes will be the future design for Canadian bills from here on. He discussed the outreach program that the Bank of Canada had with the vending industry.

“The equipment manufacturers are a smaller group, so we make sure that they have the details that they need. So we provide them with the bank notes in advance.

“So, we had a public consultation with them, and said, ‘this is our plan, this is what we’re looking at.” Parreira states that they had a small group of bill manufacturers to print the new bills, but states that it did not impede nor slow down the process. “That’s actually the best way to do it because they have such a large reach,” he insisted.

“We have ongoing meetings once a year, we talk about the new notes, we talk about what’s happening in the vending industry, we try to figure out what we can do to assist, how we can create a product that with have a minimal impact on your industry.

“With this particular note, we have started public consultation in 2016. We started the conversation with the bank note manufacturers back then,” he added.

“Couple of things that came out of those discussions and was clear: Not to change the substrate. If we went back to paper, that was going to present a problem… So, we stuck with the same polymer.

“Also, You’ll notice – even though it’s vertical, it still has machine-readable features, typically in the same areas,” he continued.

“The border was maintained and we kept the readable features in the same spaces. Our plan is to make sure that the bank note manufacturers have what they need. We’ve been sending out notes to the equipment manufacturers prior to launch, so we knew that they’ve started their testing and that you need to get your machines ready in advance. When the new notes come up, the machines will be able to accept them.

“The idea really is that these notes have more longevity, so they last longer: Paper bills used to last about two years. While the polymer bill lasts about 7 to 8 years. Canadians pay for their banknotes, so want to make sure they get that lifespan out of it – otherwise, we’re just throwing money away.”