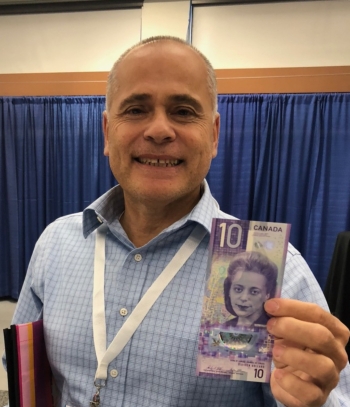 The Bank of Canada issued the new vertical $10 bank note today, featuring the portrait of social justice icon Viola Desmond, during a ceremony at the Canadian Museum for Human Rights (CMHR) in Winnipeg.

Canadians will start to see this new note over the coming weeks and months as it gradually enters into circulation alongside existing $10 notes. This particular bill marks a series of firsts: The first vertical bill for Canada, the first bill to feature a non-royal woman, and was a successful businesswoman as well as a social activist.

Bank of Canada Governor Stephen S. Poloz and Wanda Robson, Viola Desmond’s sister, spoke about Desmond’s legacy and the ongoing pursuit of human rights and social justice in Canada. They spent the first new bank notes at the CMHR, which itself is featured on the back of the new note.

“Bank notes are not only a secure means of payment that Canadians can use with confidence. They also tell the stories that have shaped our country,” said Governor Poloz. “Now, each time this new vertical $10 bill changes hands, it will remind us of our continued pursuit of human rights and social justice in Canada.”

The new $10 note, Canada’s first vertical bank note, features enhanced security features that are easy to check and difficult to counterfeit. Among them:

“In 1946, Viola Desmond took a courageous stand against injustice that helped inspire a movement for equality and social justice in Canada,” said Jennifer O’Connell, Parliamentary Secretary to the Minister of Finance, who spoke at the $10 bank note event. “More than 70 years later, we honour her as the first Canadian woman to appear on a bank note, and hope her story inspires the next generation of Canadians to follow in her footsteps.”

Desmond, a successful Nova Scotia businesswoman, defiantly refused to leave a whites-only area of a movie theatre in 1946, sparking a movement for racially equality across Canada. Her court case was an inspiration for the pursuit of desegregation across Canada. A map of the historic North End of Halifax, where she lived and worked, is also shown on the note.

The back of the note carries Desmond’s legacy into the present with several images and symbols. These include the CMHR, the first museum in the world dedicated solely to the evolution, celebration and future of human rights. Its criss-crossing ramps symbolize the history of human rights in Canada and the world—a history of setbacks and contradictions, but built on strength and hope.

The back also features an eagle feather, representing the ongoing journey toward recognizing rights and freedoms for Indigenous peoples in Canada; an excerpt from the Canadian Charter of Rights and Freedoms; and a pattern of laurel leaves, an ancient symbol of justice, which is found in the grand entrance hall of the Supreme Court of Canada.

The new $10 bank note will be rolled out in Canadian financial institutions starting today. It will gradually replace other $10 bank notes in circulation, including the Canada 150 commemorative note and the Frontiers series $10 note, as they wear out.