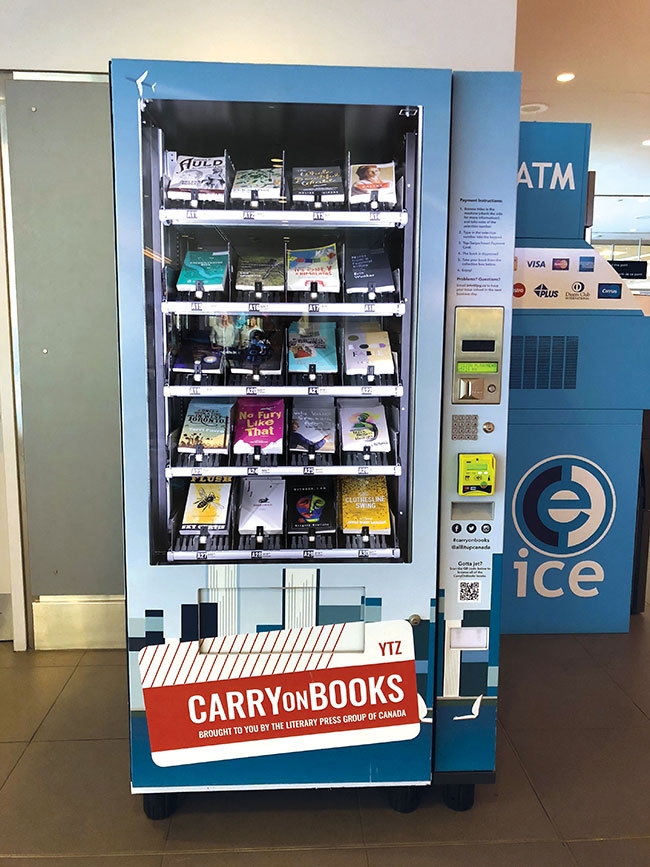 Travelling can be alternately hectic and boring – it’s all, “hurry up and wait.” A new use for vending machines kills two birds with one stone: It brings an audience to obscure, independent Canadian books that wouldn’t ordinarily be noticed, and provides commuters with brain food instead of junk food. A vending machine was set up in Toronto’s Billy Bishop Airport, to sell Canadian content to book-starved travellers.

Using vending machines for books is not particularly new: The Edmonton and Ottawa libraries use them to make their collections more accessible. Paris, France is proud of its short-story dispensing machine, and a similar idea was tried in Union Station in Toronto. Travellers like to read, and they like buying snacks.

Carry On Books started in 2017, when the Canada Book Fund wanted to try a marketing experimentation project to track projects with publishers. Six publishers are being tested on individual projects, and they’re tracking sales over a three-month period. This collective project, is currently administered by the Literary Press Group (LPG) ‘Carry On Books.’

Mandy Bayrami is the marketing manager for LPG, and took some time to explain the inspiration behind the refurbished vending machine with Canadian Vending and Coffee Service Magazine.

“We were given this discretionary marketing grant, and we thought, hey, let’s do something different, something that hasn’t been done before. The inspiration actually came from the Short Story Machine in the Edmonton airport. We thought, ‘hey, this is a really innovative idea. It’s interesting: Let’s try that.’

Our publishers are already in the indy bookshops, they’re on Amazon, they’re in Indigo, and each of them are doing their own reading events, and they’re doing their own marketing. And we thought, ‘why not try to bring in a new readership and see if we can target people who have no idea that these indies even exist?’

“That’s why we thought that an airport would be a really good space for this, and we partnered with Newport Aviation, and they were so kind to give us the space, and give us some feedback on where we should put the machine. It is pre-security, so literally, anyone can go.”

Bayrami states that the books are displayed with the description on the book on the side of the machine, so that readers can select their next read. She adds that even if this experiment with vending machines doesn’t translate into sales, it’s still a novel way to display books, and share Canadian content.

Six different publishers are represented in Carry On Books’ machine. They were chosen by the funding body. LPG had no say in “whom,” explains Bayrami: “It was just a matter of the publishers expressing interest, and then, the Canada Book Fund decided on who was going to be part of this eclectic project. Each publisher chose the books they wanted in the machine.”

The machine also offers an opportunity for “backlist books” to come to the public’s attention again: “Backlist” refers to books that were published over a year ago, and may have been lost of forgotten by bookstores that want to sell books that were published within the year. By displaying older – but still relatively recent – work, Canadian authors get a second chance at new sales.

Did the funding come first, or the idea? Bayrami explains the funding came first. LPG’s executive director Kristen Thomas, and Lauren Perruzza the engagement manager worked together with Bayrami from the start. “Right away, we were in agreement that this was something we really wanted to try, because we really wouldn’t have the opportunity, otherwise.”

Bayrami hopes the project will expand, or at least, continue. “There is quite a bit of cost to it. So, in that sense, I’m not sure that it’s that feasible for everyone to roll out. We have the machine now, so we can move it where we’d like in the future, if that is something that we end up doing,” smiles, Bayrami. “But I really do hope that other airports in other cities get on board with this. It’s fun to buy a book from a bookstore, but it’s even more fun to buy it from a vending machine. You know, it’s different – it’s innovative.”

The project began in December of 2017 and was installed in the end of May 2018. Carry On Books was fully launched in June of this year. For a project that had taken about six months to materialize, LPG is pleasantly surprised with how many books they’re selling through the vending machine.

Selecting a machine that would treat the book collection carefully from display to vending was a challenge. LPG expressed concern that the books might get caught in the turnstile, or fall and tear pages: Through careful selection and chatting with their vendor, none of those concerns came to pass.

They selected a refurbished machine that was custom made for LPG by Unattended Markets, located in Scarborough, Ont.

“They’d never done anything like this before, and they were very excited about it,” enthused Bayrami. “So, we ended up working with them to work on the mechanics of it, because we really wanted to make sure the books weren’t going to get damaged in the process.” Bayrami laughs, “I now know a lot about vending machines.”

If there is funding or enough interest in future book-vending machines, Bayrami hopes that this project can continue well past its three-month trial. She says other locations such as bus terminals or cultural hubs that house an arts organization could be opportunities for future markets.

“I think some people are intimidated by literary genres,” adds Bayrami. “I think aside from sales the most important part of project is that our publishers are being recognized. The hope is that a wider readership comes to this machine, buys a book and enjoys it, and they might go back and buy another book from that press.”