Paying for groceries with a simple wave of your phone?

Imagine pushing a shopping cart to the cashier at the supermarket and
then paying for your groceries with a simple wave of your cell phone. It may sound like a far-fetched idea, but Canadian cell phone companies are working to make it a reality. 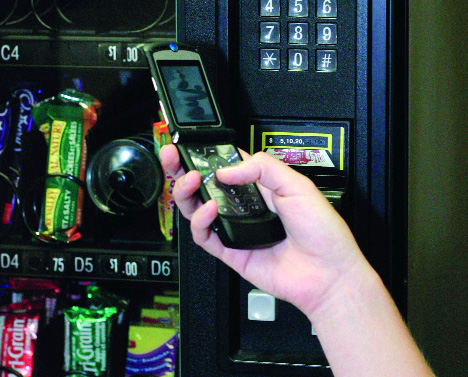 Imagine pushing a shopping cart to the cashier at the supermarket and then paying for your groceries with a simple wave of your cell phone.

It may sound like a far-fetched idea, but Canadian cell phone companies are working to make it a reality.

Bell Mobility has already begun testing the capability of cell phones to make retail purchases. Last year guests at a hotel in Kingston, Ont., were able to buy products from a soft-drink vending machine by holding their cell phones near the machine while punching in their drink selection on their phones’ keypad.

The cashless vending system implemented at the Ambassador Conference Resort allowed guests to either swipe their hotel room key card through the vending machine’s card reader or use any mobile phone to purchase a variety of Coca-Cola beverages. Guests had applicable charges appear on their invoice at final checkout. The award-winning technology was unveiled as part of a larger makeover for the resort.

Results from the 90-day trial showed 99.9 per cent system reliability, no instances of attempted vandalism to the vending machines and, most importantly, extremely positive feedback from the guests themselves.
“You can see that when a person leaves their house they’re taking their keys, their wallet and their cell phone, and it’s a natural assumption that the wallet can migrate to the cell phone,” said Paolo Pasquini, spokesman for Bell Mobility.

Users would have a chip and an antenna embedded inside the cell phone, and simply by waiving that over a reader they would be able to do the same thing that they can do today with a credit or debit card, said Chorlton.

Chorlton’s group plans to introduce the technology in Canada in stages over the coming years.

In 2007, Wireless Payment Services plans to use that infrastructure to allow for online purchases by cell phone from vendors such as Amazon.

“We will be able to purchase goods and services online, much the same way that you can purchase today using your big browser – your computer,” says Chorlton.

Ultimately, cell phones will be able to perform over-the-counter transactions at retail stores – something Chorlton predicts will be in wide use in Canada by 2010, or possibly as early as 2008.

Tim Richardson, professor of e-commerce at the University of Toronto, says the technology to make cell phones function like credit or debit cards is already being developed in Europe. But he says Canada is an ideal country to push the technology forward.

“This might be a go particularly in Canada because we have a fairly monopolistic system with Bell Mobility, Telus Mobility, Rogers Wireless and Fido. There aren’t as many players as there are in the U.S., and we have an oligarchy among our banks,” he says.

Richardson predicts that once the pay-by-cell phone technology becomes available to the public, it will take off quickly.

But just because the technology exists, it doesn’t mean all Canadians will immediately leave their wallets at home in favour of just carrying their cell phones.

“There’s a certain number of people who won’t care to use their cell phones for purchases,” says Richardson.
To tackle that reluctance, Richardson says the cell phone companies will try to convince the public that they somehow need the new phones offering the payment capability. o