ATLANTA – They did it to fast food. They did it to parking. They’re
going after what are traditionally considered cash-only businesses. And
they tell us they’re going to do it to vending.

They are the credit card associations. They know more than anyone else what it takes to change consumer habits, and the American card associations are targeting vending as their number-one market opportunity, according to James Turner, vice-president of intelligent vending at U.S.A. Technologies. 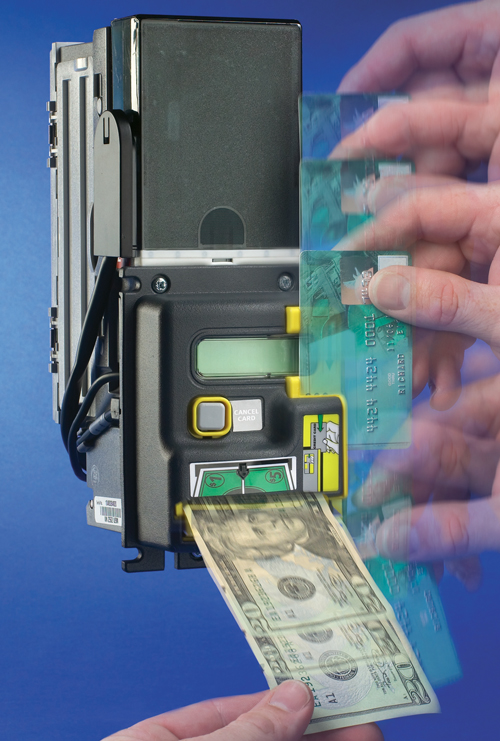 Turner spoke at the National Automatic Merchandising Association (NAMA) Exhibition in Atlanta, Georgia, on how to leverage new technology to grow your business. By the end of his presentation, he had vending operators poised, positioned and ready to reap the benefits of being an early adopter of what he said could quickly change the face of the global vending marketplace – cashless payments.

It all sounded too good to be true – especially for those operating in the typically slow-to-adopt Canadian market.
Then, on October 27, the day following the NAMA seminar, U.S.A. Technologies and MasterCard U.S.A. announced their new partnership and launch MasterCard PayPass contactless payment solution on more than 500 vending machines in the United States. The companies suggest this move will revolutionize the $40 billion global vending industry.

“Vending is one of the fastest emerging cashless opportunities,” George R. Jensen, chairman and CEO, U.S.A. Technologies said on WirelessIQ.com.

And resting safely under the assumption that the USA/Canada shadow effect will hold true, Canada can’t be far behind. MasterCard is already looking into Canadian vending opportunities, said Turner.  His guess is Canucks will be swiping within the year.

Lewis said locations like hotels, where prices are already $1.75 or more, are a “no-brainer” for cashless vending. Guests are already packing their credit cards. Wherever people use credit cards, like airports and ticket kiosks in train stations, they will use them in a vending machine, added Lewis.

Cashless vending is an added value for workplace accounts to keep employees on-site and can be a negotiation factor when attempting to land new clients, according to Dr. Michael L. Kasanava, Professor in Hospitality Business, Michigan State University.

Dr. Kasanava, who also spoke at NAMA, coined the term V-Commerce. Not virtual-commerce, but vending-commerce. Kasanava said people are adopting technology at an accelerating rate. Many will give out their credit card number online without a second’s thought. And because North Americans are becoming increasingly familiar with the idea of using their credit card for smaller ticket items, vending is an ideal channel for cashless payments.

Kasanava laid out three criteria necessary before one invests in a new vending technology. Will it give you a competitive advantage over other operators, will it improve your productivity, and finally, will it enhance your profitability?

The technology should have the right functional breadth for the company, its clients and consumers. Turner suggested a machine that brings in at least $100 a week is a good candidate for cashless vending.

When U.S.A. Technologies tested their cashless option in an airport, each machine averaged $500 a month in cashless payments.  Sales at Regal Cinemas went up 139 per cent after the addition of cashless vending for $3 beverages.

“The platform you choose should be able to do two things – cashless vend and data. It doesn’t makes sense to put two different platforms in one machine,” said Turner.

Crane Merchandising Systems’ Streamware VendMAX combines Windows-based software with a handheld device. Operators know when shelves need restocking, what was sold, and how much money was taken.

MEI offers their MEI Easitrax remote data port as an additional option to their turnkey cash and credit solution. At the beginning of November, MEI announced the agreement to incorporate Cantaloupe Systems technology into its Easitrax solution. The new version dynamically schedules machines for replenishment, effectively eliminating sold-out columns.

With dynamic scheduling technologies, operators can track actual consumption, the driver will know exactly what is needed, stale food is controlled and ultimately, consumer satisfaction will guarantee location retention.

Cashless vending gives operators the competitive advantage to secure and maintain locations, but it’s very important to look at it as an account, not as individual machines, advised Turner.

“Look to do whole accounts with cashless,” not just one machine and not the next. Operators need switch the account as a whole to allow for multiple and impulse vends, said Turner.

Together, the combination of new products and convenient payments will drive overall vending consumption. With credit card associations rallying the new, technologically savvy consumer to swipe at the machine, vending will undergo a substantial profile boost. The overall perception of vending could change.

“They’re going to do it to vending,” said Turner. And it’s going to be huge.