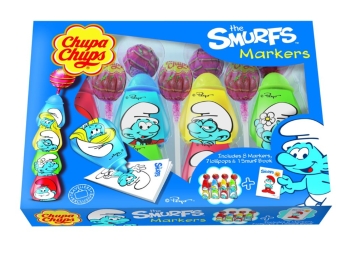 Perfetti Van Melle is focusing on March-break focused teens and young adults, with their new Mega-Chup line, new to the U.S. market.

The Mega-Chup is a limited edition giant lollipop that contains 15 fruit flavours. Perfetti usually offers one limited edition Mega-Chup a year, and they are only available in travel retail locations, such as duty-free shops in airports.

The Mega-Chup comes in a cupcake-shaped package that features ten lollipops, and 25 cupcake liners, as well as a recipe to create Chupa-Chup cupcakes. Perfetti’s website adds that “ “once all the lollipops are gone the CupCake itself can be reused as a bakingcup holder.”

The latest offering by the company features Chupa Chips Hello Kitty and Smurf Markers, also only sold in travel retail locations, as well as online shops. Sold as a way to keep children occupied during travel, each box comes with 7 lollipops and 8 markers, as well as a colouring book. This box set is also sold