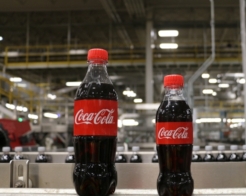 The new ‘mini’ package size kicks off a massive year of innovation for Coca-Cola in Canada, that will introduce more than 20 new beverages across the company’s portfolio, including low- and no-calorie drinks, bold flavours and soda water beverages.

“Mini bottle is one of the most exciting innovations we’ve seen in packaging in a long time! We know that people want more drink options and mini bottle is just one way that we’re meeting that desire,” says Darlene Nicosia, President of Coca-Cola Ltd in a press release. “And it’s not just smaller package sizes, we’re also working to bring more low- and no-calorie drinks to the market to help Canadians choose the package size and sugar content that makes sense for them.”

The new mini bottle packaging is the first of its kind in North America. Because its small size can affect the carbonation during the packaging process, the mini bottle uses an coating called FreshSafe, which increases shelf life by up to four months. The packaging is still 100 per cent recyclable just like other PET plastic bottles.

The company’s bottling partner, Coca-Cola Canada Bottling Ltd. invested $20 million to upgrade production line capabilities at the Brampton plant to support mini bottle production. The investment will create three new jobs to start and provides the potential to introduce other smaller packages in the future.

“We are so proud that one of our first announcements as an independent bottling company is that we have invested back in our Brampton facility,” says Todd Parsons, President and CEO of Coca-Cola Canada Bottling Ltd in a press release. “Having a local spirit and supporting our communities is very important to us and our aim is to grow our capabilities in Canada, which will in turn, grow jobs.”

The investment follows an announcement last spring that Coca-Cola Ltd. is investing $85 million to build a new plant in Peterborough, Ontario to support production of Fairlife ultra-filtered milk. The new facility is on track to begin operations in spring 2020.

The mini bottle will be available in two packages nationwide, a 250 mL single serving bottle and an eight-pack of 300 mL bottles.