Features Coffee Service
Coffee Trends: Are They Getting Younger?

Are They Getting Younger?

According to recent surveys, it seems coffee drinkers are getting
younger. Teenagers are conversant in coffee-speak and have developed
opinions about lattes and Frappuccino flavourings. Granted, most of
their knowledge comes from hanging out at a coffee shop named after
Captain Ahab’s first mate, but it is still a lot more than I knew about
coffee at their age. 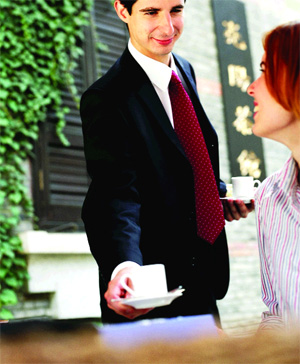 According to recent surveys, it seems coffee drinkers are getting younger. Teenagers are conversant in coffee-speak and have developed opinions about lattes and Frappuccino flavourings. Granted, most of their knowledge comes from hanging out at a coffee shop named after Captain Ahab’s first mate, but it is still a lot more than I knew about coffee at their age.

The new breed of savvy coffee drinkers are demanding more than the usual fare, are willing to pay for it and, surprisingly enough, seem willing to wait for it, under the right circumstances.

The “experience” is a big part of the premium coffee scene and is fuelled by the cozy, homey feel of the more successful purveyors of coffee. Now perhaps the younger crowd is looking to emulate a Friends episode at Central Perk, and their taste in coffee has not yet matured to drinking a double espresso – no sugar, but they are developing a taste for the king of beverages and it is starting earlier.

Indeed, most of what the teens are drinking these days in the coffee category can be described as either hotcake in a cup or liquid ice cream. Not surprisingly, sweet is still dominant as they are only a couple of years out of adolescence.

Now all the parents out there may be thinking, “I’m not crazy about my kids getting hooked on coffee before they are 16,” but consider this; hanging at the coffee shop sure beats the alternative. The coffee shop may have supplanted the pool hall or maybe even the mall for teenagers, but that isn’t really such a bad thing considering most coffee shops aren’t (yet) run by “The Family.”

So we have a young demographic that is developing a taste for sweet coffee beverages and an industry that is looking at opportunities to fill market demands, wherever they may exist … hmm. That upscale “trendy” establishments and some notable donut chains have already capitalized on this market is a given. The question is, what can our industry (vending and OCS) do about the potential?  Here are a few ideas:  The end of the academic year is coming quickly and that means, as Alice Cooper so eloquently put it, “School’s Out For Summer!”  That means a few things, not the least of which is that summer jobs will be on the agenda.

More than a few schools and community colleges have intern projects that will see young people working in establishments that you may be servicing, either with vending or a coffee service. While the cold Frappuccinos may not be in your sights for equipment and logistical reasons, the hot sweet beverages the kids have come to know and love are within range for most service providers.

Now the dog days of summer may not seem like the best time to offer French Vanilla Cappuccino, but if the environment is an office, dollars to donuts, the a/c will be jacked down to a temperature more reminiscent of January than July. This means coffee and coffee beverages will still be part of the office culture. Also, it could be the perfect time to introduce new flavours to your customers who may be looking for something different to change things up a bit. New products, while not likely to supplant the top sellers, keep things fresh and also elicit a feeling of connection with your customers.

Taking the youth strategy one step further, one need only look at what can be achieved with the new generation of full-sized coffee vendors and what they have to offer in specialty beverages. Both of North America’s largest vending machine manufacturers and those from Europe offer vendors with what seems like an endless list of product combinations that definitely appeal to Gen Xers and younger.

What is even more fascinating is the advent of being able to pay for your coffee with your cell phone. Not yet in wide use and with a few issues to iron out, this type of transaction payment not only has huge potential for operators, but it plays right into the techno-savvy hearts and minds of those who are too young to have known TVs with 12 channels on a knob or have a clue as to what Betamax was.

So does the new generation of coffee drinkers mean the demise for what we would call traditional coffee?  I would suggest not at all; but rather the transition from sweet coffee to brewed coffee will be easier than from cola to java that most of us went through. As we get older, nay, more mature, our taste preferences change and that usually means going from sweet to savory.o
Questions or comments?  Reach Brian at Brian@heritage-coffee.com