Cold coffee drinks have been around for more than a decade, with the
greatest penetration being in Europe and Asia. These drinks are
predominantly sweetened and canned (or bottled, but bottles are rare)
with some of them containing dairy or dairy-like ingredients. 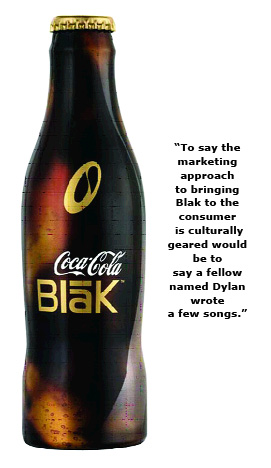 Cold coffee drinks have been around for more than a decade, with the greatest penetration being in Europe and Asia. These drinks are predominantly sweetened and canned (or bottled, but bottles are rare) with some of them containing dairy or dairy-like ingredients.

Coca-Cola, having spent millions on market research and on marketing itself, has recently introduced a product known as Blak. Trying to capture the lucrative boomer market for upscale, cold non-alcoholic beverages, Coke is trying to appeal to a new demographic that will take to the fusion of cola and coffee.

Essentially, Blak is a lightly carbonated cola beverage with real coffee essence added and a reduced caloric value than traditional Coke. Interesting enough the new product will be on the heels of the failed Vanilla Coke which tried to appeal to the Generation X crowd and younger, but was perceived as a perversion of the “real thing”.

Blak, on the other hand is being marketed, not in the shadow of its famous parent (the only reference to Coca-Cola on the can will be on the back in fine print), but rather as a stand alone product line, similar to the visual – if not structural division – given Saturn from GM.

In this regard, “Big Red” is banking on creating a whole new market segment – the carbonated coffee cola. To say the marketing approach to bringing Blak to the consumer is culturally geared would be to say a fellow named Dylan wrote a few songs. Relying in part on information technology denizens to spread the word, Coke has developed a cutting edge website for Blak that invites the html crowd to critique the site as well as use some of the tools therein to create their own work of techno art.

Now if we take the brains of Coca-Cola and apply all the economic resources available to a company that is the largest by far worldwide in its industry, you would think that all the careful research would guarantee a home run on this new product.

History, however, tells us a different story.

Besides the aforementioned demise of Vanilla Coke, remember the fiasco brought on by “New Coke” and the hording that took place of the “Old Coke” that led to the branding of “Coke Classic.” Now it is impossible to get the “New Coke” and cans are no longer identified with “Classic” as this is a little redundant.

Some have contended that this was a marketing coup designed to create a crisis and generate a lot of free ink (both good and bad) for Coke. Either way, it underlines the point that market research is not a hard science and must be tested before it can be determined it will have broad appeal; and even then, it is really hit and miss.

Where Coke deserves the kudos is in its constant push to develop new products. Sticking your neck out might let you win the race, but you may just as easily have it chopped off as well.

So will a coffee-flavoured cola beverage survive the demands of a fickle mass market? Coffee purists may differ on opinion, but it must be noted that with a few exceptions, the only coffee flavoured beverage that still holds mass appeal is, well … coffee.

Nestlé’s has had success with Coffee Crisp over the years, the Italians have done well with Tiramsu desserts, and Kahlua/Tia Maria are also popular liqueurs, but beyond these, the greatest demand for coffee flavoured beverages is our industry’s “real thing.”

It seems coffee is not as transmutable as say chocolate, which has been successful in more formats than can be counted; but this is not to say that a coffee cola is doomed for marketing trash heap either.

The real test of this new product will be how well people like it (you can push a product only so far, but if it is a dog, it will stay a dog no matter how much you try to dress it up). For foodservice and vending, it may be another product to offer where the customer is requesting diversity. The coffee industry however will look upon this as yet another possibility to introduce non-coffee drinkers to the wonderful taste that billions worldwide have come to rely on.o