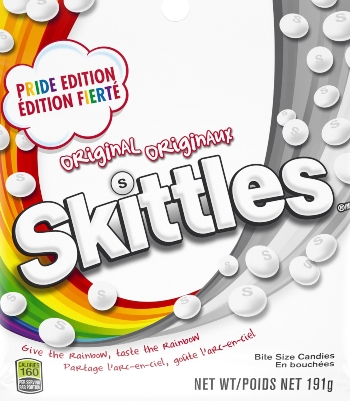 June 22, Skittles Canada will celebrate Pride by bringing together four LGBTQ2+ couples in matrimony at the first-ever Skittles Hall of Rainbows. For the first time in Canada, the brand is giving up its rainbow by removing the colours from its packaging and candies, to allow Pride’s rainbow to take centre stage.

To build on this celebration, Skittles Canada alongside actor and performer, Shangela, who will host four weddings in downtown Toronto on Pride weekend. Best known for being the only three-time contestant on RuPaul’s Drag Race and for her role in A Star is Born, Shangela will bring her larger-than-life personality and colourful energy to the proceedings, acting as host and MC for the special day.

“We believe our world is a better place when it’s full of smiles and allows everyone to enjoy their most fundamental human right to happiness,” said Jaclyn Sutton, Head of Strategy and Marketing at Mars Wrigley in a press release. “The Skittles Hall of Rainbows is our way of showing support for and spreading happiness within the LGBTQ2+ community in Canada and we couldn’t think of a better host than Shangela, as someone who supports the community in such a positive way.”

“I couldn’t be more excited to be a part of this special day, one that celebrates the love and union of these beautiful couples,” stated Shangela in the press release. “Skittles Hall of Rainbows celebrates joy and happiness for all, and for that, I give one big HALLELOO!”

Hosted in the heart of Toronto’s LGBTQ2+ neighbourhood, this will be a private event for the couples and their loved ones. Fans can follow along with some of the proceedings on Shangela’s Instagram feed and photos and video from the event will be shared afterward.

There’s also a campfire-singing, cannonball-jumping pot of gold at the end of this colourless rainbow. This Pride, Skittles is also showing support for the LGBTQ2+ communities across the country by partnering with three LGBTQ2+ summer camp programs, sending more than 150 Canadian youth to camp, a place where they’ll be celebrated for who they are and experience a summer they’ll never forget. Skittles will support Camp Rainbow Phoenix in Ontario, British Columbia’s CampOUT and the Youth Project in Nova Scotia.

Limited edition Pride Skittles are now available at retailers across Canada, while supplies last. The company reassures its fans that “giving up the rainbow doesn’t mean Skittles has lost the great taste you know and love, Pride Skittles are still the real thing.”