TORONTO (CP) – Peckish Canadians are dropping junk food in favour of
healthier snacks like fruit, yogurt and nuts, according to a recent
report on snacking habits. 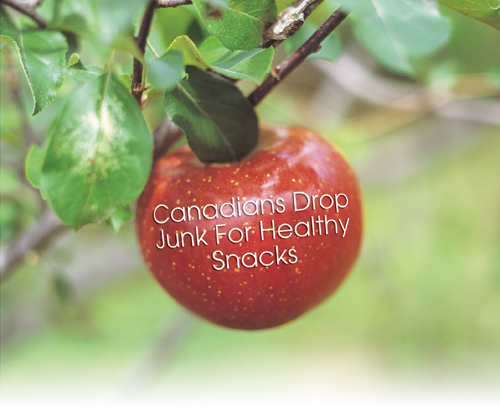 TORONTO (CP) – Peckish Canadians are dropping junk food in favour of healthier snacks like fruit, yogurt and nuts, according to a recent report on snacking habits.

“What once was the traditional snack would now be considered a treat and now considered a little more decadent,” said Marion Chan, food and beverage expert for NPD Group, the sales and marketing company that authored the 2005 Snacking Report.

Researchers found that between 2000 and 2004, the number of people who reported eating potato chips in an average week declined from 39 to 32 per cent. They also said they ate fewer muffins and less pudding.

Meanwhile, the number of those who said they selected options like fruit, yogurt and nuts when they were looking for something to eat between meals went up between three and four per cent.

Chan said the change is driven by the aging population’s desire to stave off obesity by making healthier choices – especially in light of a recent Statistics Canada survey that showed some 23 per cent of Canadians are overweight.

But, she said, it doesn’t mean people are abandoning fattier snack options altogether. Rather, the kinds of snacks that might once have been considered the norm have moved into treat territory.

“Even if you consider yourself the healthiest eater in the world and you eat fruit nine times out of 10, there will be that one time when maybe you’ll have that special treat and you eat something that’s ooey gooey,” said Chan.

She said it’s indicative of a broader shift in eating habits that will become more noticeable as the bulging baby boom population, those who are now between the ages of 41 and 57, grows older and takes stock of their health.

The report also found some 19 per cent of respondents are on a diet and another 52 per cent reported that they read food labels to avoid eating certain ingredients.

Snack food choices are the first to take on this healthy-eating trend because the choices are less regimented, Chan said. While people are locked into an image of breakfast as the time to eat toast and cereal, or lunch as the meal for soups, salads and sandwiches, snacking is more discretionary.

For the study, NPD Canada measured 3,000 people, including children, who completed food diaries for one week at some point during 2004.

The report also indicates that kids are making healthier choices – spending less of their own cash on snacks and opting instead to eat foods their parents have purchased for home.

“They’re saying, ‘You know what? There are lots of these great snacks that my parents and I agree on. Let them spend the money and I’ll spend it on something else,’” Chan said.

In 2003, young people reported spending about 15 per cent of their discretionary income on snacks. That number dropped to nine per cent in 2004.