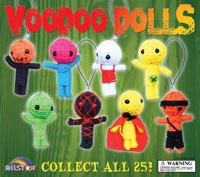 Aug. 5, 2010 – Allstar releases a
spellbinding 2” item, a second series of the hottest trend this summer
in 1” 2” caps and a great new Disney tattoo.

Aug. 5, 2010 – Allstar releases a spellbinding 2” item, a second series of the hottest trend this summer in 1” 2” caps and a great new Disney tattoo.

Voodoo Dolls
Cast a spell, make a wish or use as a lucky charm, Allstar brings their new Voodoo Doll series to the market this summer. With 24 different and colorful varieties, the Voodoo Dolls wear costume elements like: a Kung Fu headband, bow tie and cape and a sailor shirt. Some come with dangler strings – you can hang them anywhere! This item is great for boys and girls of all ages. Each 2” capsule contains one Voodoo Doll and is a suggested 2-dollar vend.

Crazy Bandz #2
When Allstar’s first wave of Bandables blew out of their stockroom within two weeks, the company knew a second series was in order. “The response was unbelievable,” said Adam Dorfman, President. “We knew these things were popular, but we never expected they would sell out so quickly.” The new series, Crazy Bandz #2 are specifically targeted at girls who enjoy wearing, collecting and trading them.

Bendable, stretchable, wearable Crazy Bandz #2 come in a multitude of shapes and colors including glitter and glow in the dark. Stretch them, and they instantly pop back to their original shapes! Each 2” capsule contains two Crazy Bandz and are a suggested 1-dollar vend. Also available in 1” capsules.

Disney Fairies Glitter Tattoos #3 come packed in 300-count boxes and are a suggested 1-dollar vend. A two-sided double display card that features all of the stickers is also available

Allstar maintains shipping facilities on the East and West Coasts, to minimize cost and expedite orders.