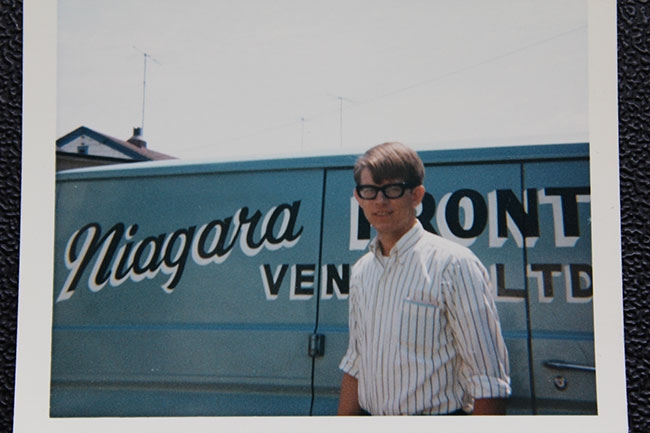 Photo taken in 1967, when Dan launched his career in vending

Dan Baraniuk has worked as Canada’s longest-running and experienced route man. He looks fondly on his career in vending, which started in 1967. A proud husband to Cathy Baraniuk, the father of five children, and doting grandfather of nine grandchildren shares his experience with Canadian Vending.

It all started with casual networking at a party. Baraniuk’s sister knew he was looking for a job, and heard a man mention he was looking for help in the vending industry. That man, Jim Fannon, would later become his business partner. “So, I went to see him on Monday, and Tuesday I was with him, pulling a run. By Wednesday I was on my own, filling machines.

“Yeah, it was quite interesting, and quite quick…I wanted to try it out, and I’ve been doing it ever since.”

Baraniuk was involved with other companies aside from Kane’s Vending, which he left in 1974, when opportunity knocked again. He was offered the chance to buy a vending corporation with his former mentor-turned-business partner. “We bought a fellow’s vending out in St. Catharine’s and that’s where we started Expert Vending, Inc.”

His early years in vending resulted in some wild stories. “I got called out to at two in the morning; Someone had tried to break in to a food merchandiser and got his hand caught in there.

“He didn’t say a word to me. I think he was a little bit embarrassed, and I was happy to get out of there, go home and go to bed. He didn’t seem happy about it, but it was part of the job…”

Sometimes, surreal is part of the route man’s experience. He laughs, recalling the time he was called out to a factory where a disgruntled factory expressed himself through modern art.

“Some fellow broke in there and took a tow mower and picked up our machines and stacked them. When I got there, they were stacked one on top of each other like building blocks.

“That guy just broke in and demolished a lot of stuff in the factory, but nobody had thought to think of the vending machines.”

Baraniuk’s laid-back approach helped him through the good, bad and the strange incidents throughout his career as route man.

“I enjoy the people. I’ve got calls that I’ve had for thirty years and I’m still going and seeing the people. I can go in some of the places like the lunchroom and I could sit down and play cards with these guys. Now, it’s a bit of a social thing for me where I can stay and spend fifteen minutes or half an hour and move on. I don’t have as many calls and that, and I’ve got the time so I can spread them out now, so I enjoy that part of it.

“My kids always say, “Dad, you’re seventy-two, why don’t you give it up, already? I don’t think I ever will. I enjoy doing it, getting out. People are good to me. I treat the people good, they treat me good.”

Baraniuk attributes his success to his mentor, Jim Fannon. “He was probably one of the best trouble-shooters around, that I know of. Taught me a lot, and I rebuilt machines, I kept machines going. I’ve got so many I keep myself busy all the time, and I can do that because I know them well.” Dan Baraniuk’s shares some wisdom with Canadian Vending that he’s gleaned from over fifty years of vending experience:

“That’s better than having the kids getting themselves in to other kinds of trouble. They’re inquisitive and want to know what’s going on. Give them credit for it. I never had the trouble that others had, of people trying to break in to my trucks. I’ve been lucky, you know. There’s another thing I’m grateful for. It’s been a good life and a great experience for me.”

Related
From the Editor: Fall 2018
Flashback: Where we were 10 years ago
Top 4 traits of a successful route driver
Virtual vending drives moving experience for MINI Canada
Tags