The fastest way to grow market share is to tap into under developed but rapidly growing segments. It’s kind of like catching a tidal wave with a surfboard – you simply ride the momentum … all the way to the bank. 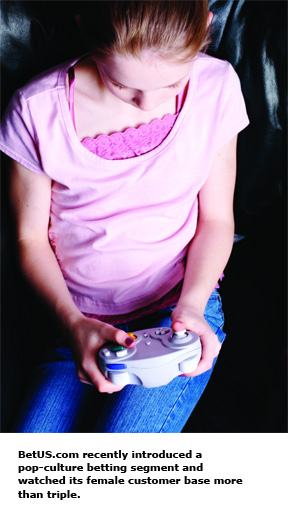 The fastest way to grow market share is to tap into under developed but rapidly growing segments. It’s kind of like catching a tidal wave with a surfboard – you simply ride the momentum … all the way to the bank.

In the case of gaming, it would appear as though the female gamer represents just this type of opportunity. More and more women are getting serious about gaming but (and it’s a big but) tapping into this market involves more than just painting the joystick pink.

When it comes to the female gamer, just how do we court the Queen of Hearts?

Ask anyone on the street to profile the typical “gamer” and you’d probably get a description of a teenage boy immersed in Star Wars-type shooting games. Game Informer magazine blew the lid of this misperception when they reported that the average age of U.S. gamers was 29 years. The study also reported that men over 18 still held down the fort, making up 39 per cent of the nation’s gaming public.
The real show-stopper however, was the news that women gamers came in second at 26 per cent, ahead of boys aged 7-15. Turns out, it’s not teenage boys behind the game controls; it’s the mothers. This is surprising because most adult women lead very busy lives. Finding blocks of time to play video games would be difficult.

Understanding why and how women are incorporating video games into their lives may prove to be the map to the holy grail of gaming. Try a dash of connectivity with a sprinkle of girl power and you may just crack the code.

The first fallacy is the long-held belief that women aren’t heavy users of gaming products. The Consumer Electronics Association conducted a study which discovered that 65 per cent of women in the 25-34 age bracket play video games, while only 35 per cent of men in that group said that they play video games.
International Digital Software Association research confirms that that 30 per cent of gamers who play more than 10 hours a week are female. Many trace the start of the female gaming trend to the launch of
the wildly popular game “The Sims.” The Sims was released in early 2000 and allowed players to create a virtual environment where players could either control a character's actions or just allow them to go about their own business. The Sims has drawn one of the most diverse audiences in gaming – more than 50 per cent female, broadly distributed across age groups.

The Sims was a success because it appealed to people who weren't interested in conventional games that pursue a fixed set of goals. Sales of The Sims broke all records – not bad for a game that the developer had to create in secret because it didn’t follow the “shoot’em up” formula of traditional games.  Lesson number one: Women like games that have a human element and aren’t necessarily about dominating the opponent.

There’s also evidence to suggest that women prefer “casual games” such as solitaire and Tetris.  It’s thought that women may be attracted to these types of games because they involve shorter blocks of time.

Casual games may be easier to squeeze into a busy schedule because they don’t involve the hours of strategy required to conquer a fantasy game with elaborate story arcs. This “in and out quickly” theory behind the greater appeal of casual games is valid but the real reason women avoid the “big ticket” games may be more primal. It may be discomfort with how women are often portrayed. Some high-profile console games sauce-up female characters in skimpy outfits with body parts that defy biological possibility.

Check out sites such as womengamers.com and the forums are full of rants by female gamers bemoaning
their frustration with the Laura Croft

character’s descent from savvy hero in Tomb Raider I to buxom bubblehead in Tomb Raider II and III. Henry Jenkins, head of the comparative media studies program at MIT, tackled the issue of gaming gender differences in, “From Barbie to Mortal Kombat: Gender and Computer Games.”

“They call it a Game Boy, right?” he said. “That's a clear sign, a huge assumption, that the players will be boys.”

Fortunately, the number of female game developers is growing so we will hopefully see more focus on games that resonate with females. Lesson number two: don’t assume the female attraction to casual gaming is due to preference. It may be lack of viable product in the “passionate gaming category.”

Savvy gaming companies are even looking at hardware to expand their appeal to broader markets.

Nintendo is preparing to launch a wireless controller that senses a player’s movements and uses them to control the video game. This device will take the “opposable thumb” method of game control and turn it into a ballet. If the game requires fencing – then the player will actually make the physical moves. It’s a bold gamble by Nintendo but one they believe will allow them to tap into previously under developed markets such as women and senior citizens.

By making it easier for the player to tell the machine what to do, gaming will be more accessible and interactive. This is a good thing if attracting more women to video games is an objective. Lesson number three: think outside of the (X) box. Don’t just look at software for the answers, user-friendly hardware may just be the best way to target female gamers.

Women represent 50 per cent of the population but are extremely under developed in the video gaming sector. We’ve traditionally missed this segment because the assumption has been that women are less inclined to participate in gaming when in fact it appears to be that the gaming product offered was lacking appeal to women.

BetUS.com recently introduced a pop-culture betting segment and watched its female customer base more than triple (from 2 per cent to 7 per cent). One player won $35,000 US betting on which song the Rolling Stones would sing first at the Super Bowl. The winning song … Start Me Up. Nice bit of pocket change you won there, Ma’am.
Let the games begin! o