It’s tasteless, odourless, colourless and available to all consumers at
no cost. Gee, now there’s a compelling creative briefing for one of the
fastest growing beverage segments! With humble beginnings like this,
who would have thought that water would become the profitable,
innovative beverage segment of today’s marketplace? 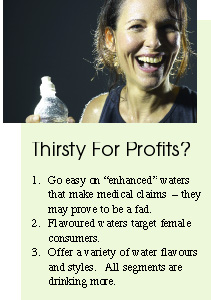 It’s tasteless, odourless, colourless and available to all consumers at no cost. Gee, now there’s a compelling creative briefing for one of the fastest growing beverage segments! With humble beginnings like this, who would have thought that water would become the profitable, innovative beverage segment of today’s marketplace?

Why has the water market grown so rapidly? Consumers are gladly shelling out several dollars per bottle for designer waters claiming to improve everything from your health to your memory. It’s an incredibly profitable business. Just where do we separate fact from fiction? Is this a fad or a trend? If we target the designer water segment, are we in danger of getting soaked?

Most marketing success stories are a function of consumer needs and wants. Humans absolutely need water to survive. It’s a “have to have” not a “nice to have.” Our bodies are made up of 70 per cent water and we will perish from dehydration before starvation if deprived of food and water.

Cornell University reports that 75 per cent of Americans are chronically dehydrated, causing daytime fatigue, joint pain, and lack of mental focus. It’s been widely reported that humans need eight to ten, eight-ounce servings of water per day for optimum health. It’s a mantra that has caught on with consumers and is largely attributed to our obsession with water in today’s marketplace. Some experts are questioning that assumption. Heinz Valtin, M.D. of Dartmouth Medical School (a world-class expert in water metabolism), published a review in the American Journal of Physiology suggesting there’s no evidence to support the eight by eight claim. He traced the origin of this urban legend to a 1945 Food and Nutrition Board recommendation that said humans should ingest “one millilitre of water for each calorie of food,” which amounts to roughly 64 to 80 ounces of water a day.  But (and it’s a big BUT) the next sentence said, “Most of this quantity is contained in prepared foods.”

Valtin suggested that six, eight-ounce glasses of water is a better target to shoot for and that some of this can be accomplished by drinking coffee, tea, milk and carbonated beverages. It’s unlikely however, that these findings will ever replace the urban legend of the eight by eight rule. It’s been reported so many times in the media that consumers have come to believe they need to drink this amount of water daily. So we’ve identified the cause of the “needs” end of the equation, but how did we actually come to “want” water? After all, we can get it for free.

Water has become a status symbol. Most beverage marketers trace the genesis of the designer water trend back to the introduction of Evian water in the 1800s. Evian pioneered a clever marketing campaign during the 1950s, by marketing Evian to young mothers with infants. Evian, the company claimed, “helped lactating mothers provide important minerals for infants.” The soft pink and blue pastel colours on the Evian label were designed to convey purity and innocence. The marketing strategy was truly inspired as Evian got a foothold in the very lucrative Baby Boomer cohort, which took the product to market leadership.

Perrier water from France built upon this foundation throughout the seventies and eighties. Launched in the early 20th Century, Perrier didn’t gain international popularity until the 1970s when all things designer and French became popular. The fitness sector became big business around this same time as people began to jog and join fitness clubs en masse. Drinking Perrier said to the world, “I’m fit, healthy and affluent.” Perrier got us thinking of water as something we would be willing to pay for – it broke the category wide open.

It is estimated that there are over 10,000 brands of bottled water throughout the world today. Mineral water and spring water sources account for one third. The balance of these 10,000 brands are good old tap water processed and bottled – perhaps with a little pixie dust sprinkled in. Many bottled waters simply have an added flavour, claiming only to make a tasteless beverage a bit more pleasing. Many other waters cross the line, claiming to be elixirs enhanced with everything from oxygen to enzymes. Most consumers perceive these enhanced waters to be healthier and more nutritious than tap water. This perception is largely incorrect.

Oxygenated water has been enhanced with an extra shot of O2. More oxygen in our water must be a good thing – right? Sure, if you’re a fish. Some of that extra oxygen escapes as soon as the bottle is opened because the body cannot absorb the oxygen consumed. Our lungs are exquisitely designed to absorb oxygen; taking one extra deep breath will provide our bodies with many times more O2 than could ever be added to a bottle of water.

According to AC Nielsen data, the enhanced water segment – while accounting for only four per cent of total dollar sales of total bottled water – contributed 10 per cent of total category growth. This growth in “pharmaceutical waters” may be fleeting as markets shift to other fads, but consumer reasons for choosing water as a beverage still makes for a solid business case. The key is to find the long-term trend that most likely resides in the flavoured water category.

It makes sense that flavoured waters are growing by leaps and bounds. It’s a product that nicely bridges the “boring but good for you” plain bottled water and the “tasty but empty” carbonated soft drinks. Water with a kiss of raspberry, peppermint or lemon is posting growth at a pace three times that of “isotonic” sports beverages. It follows a trend we’re seeing in many other categories – the shift away from foods and beverages lacking any nutritional value. We want the things we consume to benefit us and taste good.

Nestlé’s Pure Life Splash line of waters perfectly targets this market. Many small companies also offer waters with a dosage of flavour but Nestlé (who also owns Perrier and several other strong water brands) certainly knows their way around the category. If they’re in the business, you can bet it’s got legs. Forbes magazine recently reported that the flavoured water category is predicted to grow from $170 million US in 2004 to $800 million US in 2009.

Water is the plain Jane of the beverage category. This beverage’s strength ironically resides in its simplicity. Water was the perfect blank canvass on which to   create so many wonderful options. Who would have imagined it just 50 years ago? In the end, it’s an appropriate trend for the Age of Aquarius. o

Michelle Brisebois is a marketing professional with experience in the food, pharmaceutical and financial services industries. She specializes in brand strategies. Michelle can be reached at briseboismichelle@sympatico.ca