The 2006 International Food & Beverage Show was a high-energy event.  Attendees at last month’s trade show were hyped-up about the newest product innovations and the latest food trends. But, it was the energy drinks that really had them buzzing.

The 2006 International Food & Beverage Show was a high-energy event.  Attendees at last month’s trade show were hyped-up about the newest product innovations and the latest food trends. But, it was the energy drinks that really had them buzzing.

The show, held annually in Toronto, is the nation’s largest food and beverage exhibition. This year, two new brands of energy drinks were launched into the Canadian market. BooKoo Energy, the number-four distributor in the U.S., took its post at the show as “the largest-growing energy drink brand,” according to Marty Jay Zirofsky, division manager. And no one could have missed hip-hop artist Nelly’s Pimp Juice and his not-so-subtle marketing prop, a supped-up low rider with 24-inch chrome rims.

But it was Red Rain that was getting all the attention from vending operators, according to Chris Fawcett. University foodservice personnel and independent vending operators took a keen interest in the Red Bull copycat, which retails at a dollar less than Red Bull and with the half the amount of caffeine.
Fawcett said energy drinks would be applicable for vending if situated in the right place. So where is the right place? And are energy drinks even worth the investment?

Trend Or Fad?
Energy drinks are said to be one of the fastest growing segments in the beverage industry. Typically loaded with sugar, caffeine and other, often “questionable,” additives, one thing is for sure – they’re being served up all over Canada with a healthy dose of media hype.

The initial buzz was generated by the Austrian-made, now international phenomenon, Red Bull. With its distinctive blue, red and silver, and notably slim 8.3 oz can, Red Bull has paved the path for a whole slew of worthy competitors. Energy drinks have generated more than $1 billion in worldwide sales per year, with about 10 million litres consumed in Canada per year, according to Refreshments Canada.
Canadian Vending asked Dana McCauley, a food trend expert and a part of the team of ideators who created Coca-Cola’s Rockstar Energy Drink, if she thought this trend had real staying power.

“The coffee house trend and the ice and regular tea trend have matured to such a degree that I think caffeinated sodas have an excellent chance to have long lives,” she predicted.

Target Market?
McCauley said there is serious market potential for energy drinks via the vending channel – especially wherever hard-core partiers and university students can be found.

“University students are into the here and now. They want what is cool and new … campuses are a place where fads rule. Likewise, between studying and partying, university can be an exhausting experience, so energy drinks targeted toward different physical and psychological need states (tired and needing focus, or tired but wanting to hit the dance floor, etc.) are perfect for this demographic,” she advised.
Consider the success of Gatorade and Powerade as staples in vending machines found in health and fitness centres, said McCauley. Research seems to show that if customers think that a food or beverage has an advantage that will make them look or feel better, that they are willing to pay more than they would for a similar product that does not offer the same advantage, she added.

Red Bull is setting the market price at $2.99, according to David A. Leb of Canadian-made Liquid Ice. He said some drinks, like Rockstar, are sold in larger formats to target bars and restaurants that use energy drinks as an alcohol mix. Otherwise, the price seems to be fairly universal across the board.
Red Rain hopes their lower price will differentiate them from the other brands. Leb hopes Liquid Ice with stand out above the crowd because it doesn’t have that “medicinal aftertaste” associated with so many of the others. 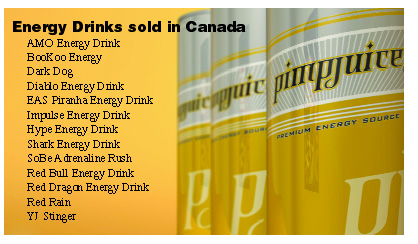 Like all the other “ladies in waiting,” Liquid Ice is still awaiting approval under the Natural Health Products Regulations set forth by Health Canada, said Leb. Currently, only Red Bull is authorized for sale as a natural health product. Health Canada has always kept a close eye on energy drinks. Four years ago, they weren’t allowed on Canadian shelves. And because of the recent barrage of media attention surrounding the safety of energy drinks, Health Canada promises it will continue to monitor their use.
Not to be confused with sports drinks like Gatorade, energy drinks boast high amounts of caffeine and are criticized for dehydrating, rather than hydrating the body. The average energy drink usually contains somewhere between 80 and 160 milligrams of caffeine. A can of cola holds about 41mg and a cup of coffee, about 137 mg.

Meant to supply both mental and physical stimulation, energy drinks have become a huge hit at all-night bars, parties and dance clubs, especially after legal serving hours. Health Canada warns the real danger occurs when energy drinks are consumed as a mix with alcohol. But young adults seem to be willing to take the risk. “Red Bull and Vodka” has positioned itself as common as rye and Coke in Canadian bars and clubs.

According to Creative Concepts, Red Bull originally designed their vending machines for use at the major sporting events they sponsor. Creative Concepts was selling these used first-generation machines and Red Bull decided to make them the exclusive distributor for their new second-generation machine. According to technical support, “they (Red Bull) didn’t want to go through the process of establishing routes and finding clients and having to create a whole other department.”

Red Bull vending machines are not available in Canada, but Creative Concepts said they are working toward that goal.

So, unless Canadian operators are landing accounts at some of the country’s largest sporting events, they might want to try their hand at energy drinks by designating a few rows in their cold beverage machines.

If Victoria-based Sport Boy Holdings had their way, operators would forget about their cold beverage machines all together and look to their snack machines. They’ve created one of the first of its kind – the Maddog Energy Bar. Maddog is a chocolate-coated peanut and rice crisp bar packed with the same stimulant found alongside caffeine in many energy drinks – guarana. Guarana is boasted by its users as delivering the same invigorating simulation as coffee without the “jittery” feeling. Maddog packs as mean a punch as its liquid counterparts, and is similarly not suitable for people with high-blood pressure, heart disease, pregnant women and small children. Tweens, teens and young adults, on the other hand, can’t seem to stay away.

With old-school rapper Ice-T giving continual “props” to Liquid Ice, hip-hop artist Nelly backing his own energy drink, Pimp Juice, and Red Bull pumping its newest marketing campaign, “Red Bull gives you wings,” young Canadians really are chugging back the message. Vending operators can read into it what they will, but for the time being, the buzz surrounding energy drinks doesn’t seem to be fading any time soon. o