May 25, 2017
By Taylor Richardson Fredericks

On value (and prospects) of Family Entertainment Centres

May 25, 2017By Taylor Richardson Fredericks 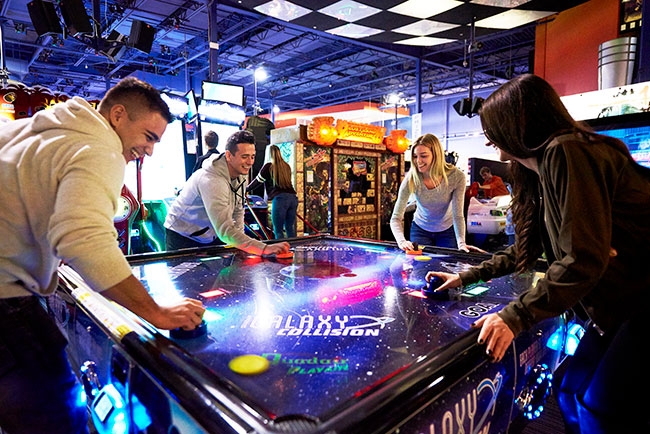 “The locations best equipped to get people out of the house are those that offer an enjoyable experience to all guests, no matter their age, spending power or level of experience,” says Joe McCullagh of Player One Amusement Group.

In an age when it’s possible to have almost any form of entertainment you desire delivered directly to your living room – whether it’s through web streaming services like Hulu and Netflix, or home gaming options like Xbox Live and Steam – it’s fair to wonder why anyone bothers to leave the house anymore.

It’s also fair to wonder what this newfound home-based convenience means for the future of Family Entertainment Centres (FECs), a long-held staple of the Canadian entertainment landscape and an important source of revenue for many vending operators across the country.

Amusement gaming has long been a part of Canada’s cultural fabric, from the so-called golden age of arcade gaming in the late 1970s and early 1980s to the restaurant-amusement combos that began to appear in the 1990s – places where teenagers could hang with friends, and where both parents and children were able to unwind between games during weekend sports tournaments.

Modern FECs, however, have come a long way from their humble origins in malls and movie theatres, with many now offering guests an experience that’s far more dynamic, experiential and socially engaging than the arcades and bowling alleys of yesteryear.

“When it comes to FECs, there’s sometimes this unfortunate stigma of the 1985 arcade in the dingy corner of a mall,” says Joe McCullagh, the president of Player One Amusement Group (P1AG), an out-of-home gaming service provider and operator whose flagship locations include Mississauga’s Playdium and Edmonton’s The Rec Room. “There’s still a couple of those old arcades out there, but those days are mostly gone.”

These days, McCullagh says, the locations best equipped to get people out of the house are those that offer an enjoyable experience to all guests, no matter their age, spending power or level of experience.

“The best-performing FECs are the ones that have an equipment mix that really transcends different age groups – things that parents can play with their kids, games that teenagers can play together, or games that appeal to millennials or older.”

Thinking ouside (X) box
With the advent of online gaming in the early 2000s, many feared FECs were entering a period of permanent decline. Instead, console and PC gaming have helped to develop a new generation of gamer that has challenged FECs operators to refine their vision for the industry.

“The average age of video game players today is 30 years old,” says Derek Giesbrecht, the owner and operator of the FEC Network, a commercial network of amusement business resources based in Chilliwack, B.C. “Likewise, the breakdown between male and female gamers is almost an even split now – it’s 45 per cent female, and 55 per cent male. The reality is that games are ubiquitous now. They’re with us everywhere. And so the new paradigm for FECs, I believe, is to attract that kind of gamer.”

Attracting home-based gamers, however, is not simply a matter of replicating the experiences they have when playing on their computers, consoles or mobile devices. What these gamers are searching for is a kind of experience they can’t get at home or on their phones.

“They’re looking for something high-fidelity, sure,” Giesbrecht says. “But they also want something that feels authentic, a social and interactive experience where they can all come out and play together as a group.”

For Mike Abecassis, the chief executive officer of GameTime – an FEC chain with six locations in Florida, and two more currently under construction – creating opportunities for social interaction is the key ingredient to a successful FEC operation, the thing that sets it apart from home gaming and other entertainment options.

“People tend to think that home gaming and FECs go hand in hand, and that we’re competing for either dollars or eyeballs,” he notes. “The reality, though, is that our customers are looking for a completely different kind of experience than those offered by home-gaming platforms.

“People tend to think of us as arcades, or video game centres, but we’re really more of a social engagement environment.”

Sharing an experience among friends
The trick when it comes to creating an engaging social experience, according to Abecassis, lies in offering gaming and amusement possibilities whose value extends beyond merely playing a game.

Another important element of creating meaningful social experiences depends on offering a range of activities to choose from, since this allows guests to naturally cycle between playing and spectating. P1AG’s The Rec Room, for instance, offers activities as diverse as ping pong, pool and axe throwing in addition to more traditional FEC fare.

“If some of your friends want to go a bowling on a Saturday night, there’s usually a few who aren’t interested,” McCullagh says. “When you go to an FEC, though, you’re there to watch your friends play as much as you’re there to play yourself. In these mixed-use facilities, there’s an opportunity for people to choose the experience they want, which greatly widens the demographic that these facilities can attract.”

For his part, Abecassis believes the most successful FECs and operators are able to extend this kind of thinking beyond the games and amusements they offer and to apply it to every aspect of their businesses.

“We tend to think of everything in our buildings as activities – whether it’s our bar offerings or our food offerings or our party offerings – and try to consider what sort of opportunities for interaction that each of these activities offer. People leave their homes not just for a meal, but to engage with their friends or their family over a meal. That’s where I think FECs are starting to win over guests. We’re trying to build a certain type of time in the building.”

It’s thinking like this that creates value not only for customers but for operators as well. As Giesbrecht notes, by creating dynamic and socially engaging experiences for guests to enjoy, operators create opportunities for return visits.

“On the operators side of the coin, the question for us is how do we attract paid customers to come back and keep playing?”

Not just for kids anymore
Though FECs have traditionally been associated with the youth- and family-oriented demographics their name implies, a trend has emerged in recent years showing that they are clearly broadening in their appeal. This trend has been driven in part by operators’ willingness to expand and diversify their amusement offerings, and in part by the economic and financial emergence of millennials, who as a generation have shown a willingness to spend their money on experiences rather than products.

One reason he believes FECs have taken off with non-traditional demographics is that, in addition to already being fluent as gamers, many millennials appreciate the low-key, low-cost fun FECs can offer.

“I think part of the reason it appeals to this demographic, beyond being fun, and a place where they can relive their youth, is that it doesn’t have to be an expensive outing. If you go to a bar or an amusement park or a hockey game, those can be expensive nights out. But you can go to Playdium and hang out with your friends for a couple hours and not spend a lot of money, if you don’t want to.”

New and diverse offerings aren’t the only thing drawing older and more diverse demographics to FECs, however. For some, the allure of FECs lies in the nostalgia they feel for the games of their youth.

“We still see some low-tech games that are really working,” McCullagh says. “Skee Ball is still a really high earner for us, as are the basketball games, which have been around for ages.”

“The locations best equipped to get people out of the house are those that offer an enjoyable experience to all guests, no matter their age, spending power or level of experience,” says Joe McCullagh of Player One Amusement Group.

Old games, new tricks
Giesbrecht, for one, has been quick to take note of these recent demographic shifts. He believes operators can do more to draw people into FECs and make them repeat customers. In addition to his work with the FEC Network, he also serves as the director of game development for ARENA-X, an innovative, high-concept approach to laser tag that aims to draw in older and more sophisticated players with campaigns, gameplay, and esthetics similar to those found in a blockbuster video game.

“Most laser tag centres today are still focused primarily on the weekend and birthday party business,” he says. “What that focus does, though, is leaves a huge hole in your schedule between Monday and Friday afternoon, where you’re left waiting for that demographic to come back on the weekend. What we’ve done is actually design the arenas, the layouts, the environments, the lightings, the effects – the whole package, really – for the 30-year-old gamer.”

By modelling the ARENA-X laser tag experience after a video game – with multi-mission campaigns, realistic floor plans, weapon upgrades, and levelled achievements – Giesbrecht believes he can both broaden the game’s appeal and ensure pre-booked, repeat business without alienating his core demographic.

“The reality is that, in doing this, we aren’t affecting our traditional customer base, because younger kids love the experience just as much. This way, though, we get great party business and groups on the weekend while using a sophisticated marketing package to develop local opportunities for members, league play, corporate business and teambuilding programs.”

There are currently three ARENA-X facilities in Canada – including Glowzone 360 in Brampton, Ont., LaserAction in Terrebonne, Que., and District-1 in St. Bruno, Que. – as well as three in the United States.

The future is bright
Whatever doubt may have once existed about the future of FECs, particularly near the turn of the new millennium, it has long since been replaced by a sense of growing optimism among those with knowledge of the industry. With broad demographic appeal, increasingly diverse offerings, and a strong consumer appetite for social experiences that provide new and novel reasons to get out of the house, it’s clear that there is a great deal of opportunity for operators in the
FEC sector.

“We’re seeing quite a boom in out-of-home amusement and entertainment, particularly when it comes to putting amusement equipment or entertainment centres into places like restaurants or bowling alleys or trampoline parks,” McCullagh says. “We’ve also seen a recent boom in venues like shopping centres and airports – places where people are already congregating – because it gives them a place to go within that environment to have a good time and socialize.”

As Abecassis points out, it’s slightly ironic that the very thing which once seemed such a threat to the industry – the ease with which we can access entertainment options in our homes and on our phones – may instead be one of the biggest factors in reminding us of the value that FECs and spaces like
them hold.

“It’s funny, but social media and home entertainment can often feel very antisocial. In some ways, people are more physically disconnected than they’ve ever been. So when they find an environment that allows them to engage with their friends, that tends to generate a lot of excitement in them, which is a feeling they aren’t likely to forget.”