For a video game, Pac-Man is getting downright old. The ghost-wary hero
with an insatiable appetite for dots turns 25 this month.

For a video game, Pac-Man is getting downright old. The ghost-wary hero with an insatiable appetite for dots turns 25 this month.

From Pac-Mania in the early 1980s to today’s endless sequels and rip-offs, the original master of maze management remains a bright yellow circle on the cultural radar. But there was more to Pac-Man’s broad appeal than eating dots and dodging on-screen archrivals Blinky, Pinky, Inky and Clyde. 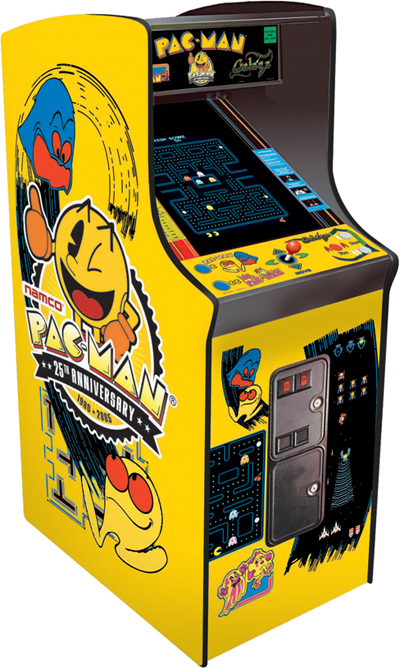 “This was the first time a player took on a persona in the game. Instead of controlling inanimate objects like tanks, paddles and missile bases, players now controlled a ‘living’ creature,” said Leonard Herman, author of Phoenix: The Rise and Fall of Videogames. “It was something that people could identify, like a hero.”

It all began in Japan, when Toru Iwatani, a young designer at Namco, caught inspiration from a pizza that was missing a slice. Puck-Man, as it was originally called, was born. Because of obvious similarities to a certain four-letter profanity, Puck became Pac when the game debuted in the U.S. in 1980.

Its success spawned a romantic interest (Ms. Pac-Man), a child (Junior Pac-Man), a cartoon show and hundreds of licensed products. The phenomenon even reached the pop music charts when Pac-Man Fever by Buckner & Garcia drove us all crazy in 1982.

Billy Williams, the first and only person known to play a perfect game of Pac-Man (he racked up a score of 3,333,360 after clearing all 256 levels in more than six hours in 1999, according to video game record keepers Twin Galaxies) says Pac’s popularity was in its nonviolent simplicity.

“The fact that it’s cute, it’s almost like a hero running around the board from bad guys. It’s not an appeal based on violence,” the 39-year-old from Hollywood, Fla., said. “Whether it was an 80-year-old lady or a kid, everyone could adapt to the Pac-Man world.”

The company has several new games this year, including Pac-Mania 3D, Pac-Man World 3, Pac-Pix and Pac-Man Pinball. It even began making a special 25th anniversary edition of the old arcade machine.

“People say, ‘Who buys Pac-Man?’ It’s one of the few games where the answer is, ‘Everyone,”’ said Scott Rubin, general manager of Namco America.