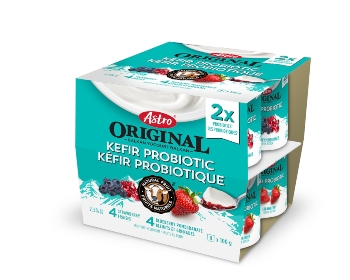 Astro Kefir Probiotic Yogourt claims to contain twice the probiotics of any other. This is Astro’s first kefir-based, naturally thick, spoonable yogourt.

“I believed that all yogourts contained the same amount of probiotics, and I’ll admit it – I was wrong!” exclaims parenting and lifestyle expert Maureen Dennis in a press release. “That’s why I’m so excited about the launch of the new Astro Kefir Probiotic Yogourt, my new favourite anytime treat contains more probiotics than any other yogourt on the market – and it tastes good, too.”

Seven-in-ten Canadians feel that eating natural foods is an important factor in building a healthy lifestyle, only slightly surpassed by getting a good night’s sleep and exercise. People truly care about what they are putting in their bodies and are discovering that nowadays healthy foods can taste just as good as unhealthy options.

New Astro Kefir Probiotic Yogourt not only helps with digestive health (thanks, probiotics!), it also has the added benefit of an ingredient list that doesn’t require a dictionary for you to understand. So, if you’re part of the 77 per cent of Canadians who don’t want to spend their precious time deciphering a complicated ingredient list, new Astro Kefir Probiotic Yogourt is for you.

“Astro has long been a favourite of Canadians from coast-to-coast. Made with 100 per cent Canadian dairy, easy to pronounce, natural ingredients with an all-natural process – our yogourt has won the hearts of Canadians …but we’re not stopping there,” says Adrienne Pagot-Gerault, general manager of Cultured Division at Parmalat Canada in the same release. “New Astro Kefir Probiotic Yogourt is our first kefir-based yogourt that has 2x the probiotics of any other spoonable yogourt on the market – something we know will make this new Astro product a favourite for years to come.”