Perspectives and advice for Canadians planning to attend Host Milano. 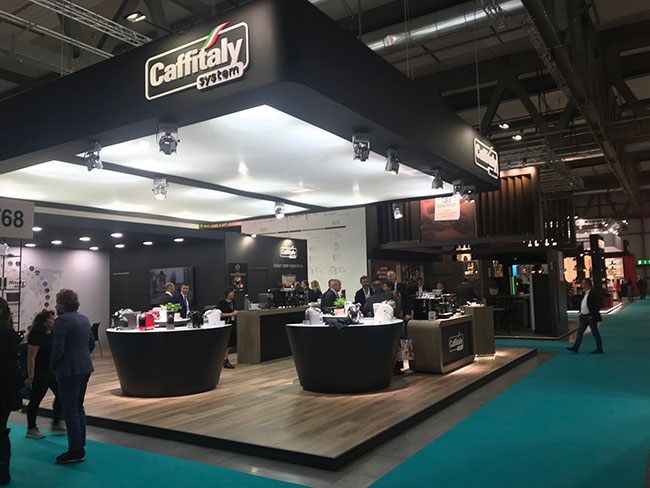 Companies created entire functioning cafés, to showcase products not yet seen in the U.S. or Canada.

Last October eight CAMA members joined a Canadian delegation and attended the Host Milano show. “It was an extraordinary experience that gave our members as hosted buyers an opportunity to visit Milan, and more importantly, provided them with learning opportunities to help advance their business,” stated Marie Saint-Ivany, Executive Director of CAMA.

Thomas Gwizdala, founder of Beans and Grind Inc., has been a CAMA member for nearly 20 years, most recently under the banner of the company he founded. Gwizdala attended the 2019 Host Milano show as both coffee connoisseur and a trade show expert.

“My first impression was, ‘Wow!’ Just, ‘Wow!’ the sheer size, the amount of exhibitors and attendees, the show was really unlike anything I’ve ever seen before in North America, and I attend all of the shows in North America,” enthused Gwizdala. “This was exponentially larger.”

With roughly two hundred thousand operators coming from 177 countries, Gwizdala’s enthusiasm is not an exaggeration. Many vendors, operators and coffee experts from around the world come to see the Host Milano trade show, which focuses on hospitality, food and drink.

“I did enjoy seeing some of the new equipment suppliers that I was not familiar with in my travels through North America. And those that I was familiar with that were at the show, the interesting thing, they had an expanded or different offering because they were on the world stage as opposed to just being specific to the U.S. or Canadian Market.

“Some of the more memorable things from our discussions and meetings that I had were meeting with new suppliers like Pelican Rouge, and some new equipment providers; although they are not unique to the global market, (Schrayer being one, Evoca Cafection would be another) they had a different line-up of equipment at the show,” added Gwizdala. 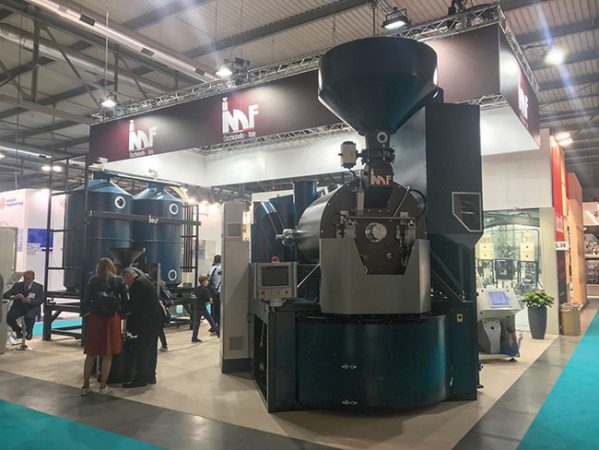 Industrial roasters, and coffee making were only a fraction of the products and services shown at this international trade show.

“On this global stage, they had a considerably more robust offering in terms of different types of machines, and varieties and technologies I had never seen before. I believe the intent is for these things to make their way into the Canadian and US market. This is the show where they showcase everything and make the decision which product goes where. It was really exciting to attend, because you’re seeing everything first. You’re potentially even seeing some things that may not even make it to the Canadian market, so you have not only have the visibility and perspective into that product or technology, but you also have the opportunity to make the decision, ‘do I want to be the one to bring it to the Canadian market?’”

The opportunity to bring Canadian vending and office service delegates to Host Milano was made a reality through Marie Saint-Ivany. She mediated with other associations, particularly Restaurants Canada to buyers to Milan.

“Saint-Ivany connected us with the people in Italy responsible for bringing buyers to Host Milano, added Dan Stewart,CEO of Savco Food Services and BrewBakers Coffee and Tea. “And the show organizers, I think have expressed an interest in expanding office coffee and vending to the show in the future.”

“You know, it’s been very successful,” continued Stewart. “Over the years Host Milano has been running, they’ve tried to broaden their horizons and bring in more and more international buyers. Buyers and exhibitors can measure the interest in certain products. Network distributors interested in hearing about your product, that sort of thing.”

While neither Gwizdala nor Stewart saw many Canadian companies represented, but both feel the potential for future international connections is valuable. Paired with the variety of technological innovations and trends in hospitality, the trade show experience was one they highly recommend.

“I think the (CAMA) delegation that attended this year, is just getting exposed to it. For those that have the opportunity to attend, this would be a great platform to showcase what we have to offer,” stated Gwizdala. “The access you have to the global market made it worthwhile. From my perspective anyway, we have only just scratched the surface.”

Both Gwizdala and Stewart would gladly go again. Having personally experienced the scale and scope, both state planning is more crucial than with other trade shows.

“You have intelligently plan your meetings,” suggests Gwizdala. “Because of the sheer amount of attendees, you really do need to plan your meetings in advance with whom you want to spend time with, because in some cases, it would be impossible to get someone’s attention with that amount of people there.”

Stewart suggests that the use of the Host Milano phone app was a useful tool to manage time. “When you first are accepted as a buyer, months ahead of the show, you’re given a login to the website, to connect with exhibitors. You schedule appointments. You can you can search for exhibitors by category. When you see the company you can link with their website, and there’s an explanation of what they do, and you can decide if that is an exhibitor that you might be interested in seeing.

“You can request an appointment with that calendar. The idea is you have a number of appointments, set up before the show. And then there’s a phone app to put on and that phone app will show your schedule it’ll tell you how far it takes you to walk from this meeting to this meeting,” said Stewart. “You can communicate with your doctors and set change appointments while you’re watching the show so very, very well organized.”

Both Gwizdala and Stewart felt that it was a fast-paced show, but ultimately fascinating. “One product that comes to mind is there was a robotic bartender, if you will,” recalls Stewart. “They had a little bar set up with this robot behind it, you can order drinks, and the robot arm would go around and do the shot of the liquor. You know the consequences could be expanded to serving coffee as well.”

Gwizdala is particularly pleased with the outcome of Host Milano 2019.

“I fostered and developed some new partnerships. I’ve actually started reviewing equipment that is unique to Canada: I’ll probably be the first to bring it in…more to come on that, it’s top secret for now,” Gwizdala laughs.

The next Host Milano event will take place October 22-26, 2021 and once more, CAMA in conjunction with Feira Milano will extend invitations to members to participate as Hosted Buyers. If anyone should like to obtain more information, don’t hesitate to contact the Executive Director, Marie Saint-Ivany msaint-ivany@vending-cama.com.