The juke box’s latest vision arrives on the scene

TORONTO (CP) – Like an aging rock star pining for past glory, the jukebox is attempting a comeback. Having fallen out of favour decades ago when they were fixtures in bars
and diners, the clunky coin-operated music machines are getting a
high-tech makeover aimed at reviving their popularity among a new
generation. 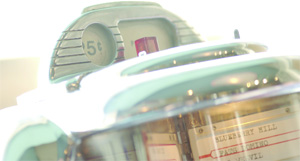 TORONTO (CP) – Like an aging rock star pining for past glory, the jukebox is attempting a comeback.
Having fallen out of favour decades ago when they were fixtures in bars and diners, the clunky coin-operated music machines are getting a high-tech makeover aimed at reviving their popularity among a new generation.

This month, several dozen digital jukeboxes packed with more than 10,000 downloaded songs and built like giant iPods, will begin showing up in select cities across Canada.

The roll-out, which is being pushed by three small Canadian companies, will see more than 100 multi-coloured, Austrian-built jukeboxes installed everywhere from lounges and pubs to bowling alleys and pizza joints.

By the end of the year, that number is expected to reach 250 units, beginning with Calgary, Toronto and Montreal.

But the technology – and the economics – of the industry have changed substantially since the days when vinyl-stocked jukeboxes were king.

The new versions, with touch screen directories, computerized search engines and the capacity to hold 10 times the music of their nostalgic predecessors, cost about $7,500 each. In the quarter century since Joan Jett screamed “put another dime in the jukebox baby,” the price of a song has climbed to 50 cents.
Those behind the revival believe the time is right for a jukebox renaissance. “We think we can bring the market back up to present day,” said Dean Ernst, director of Promo Only MPE, a Calgary-based company that is working with distributors SML Entertainment of Calgary and TW Gilchrist Vending Ltd. of Toronto on the project.

The jukebox industry never fully recovered from the death of vinyl records, which brought an end to its 30-year heyday in the mid-eighties. While jukebox makers attempted the transition to compact discs, those machines never fully caught on.

Maintenance costs were higher, the popularity of jukeboxes was declining over all and record labels, who supply catalogues of music to vendors at discounted prices, began to balk as concerns of CD piracy grew in the nineties.

With rising licensing fees and a dwindling supply of music, many bar owners found it simpler and cheaper to plug in a stereo.

“Right through the eighties it was strong. But going into the nineties, we probably saw the popularity drop off,” said Dean Fisher, marketing director of SML.

“Piracy has been a real problem. There’s good operators and there’s bad operators. I guess that’s the easiest way to put it.”

Companies like Promo Only, which specializes in distributing new music to North American radio stations by encrypting songs so they can be e-mailed or downloaded without being copied, have convinced record labels to embrace the digital jukeboxes in the last two years.

Though the technology has been around since the late 1990s, only a small number of digital jukeboxes are in operation. Digital song encryption has reopened the door for catalogues of tracks to be distributed to jukebox vendors at vastly discounted prices – in some cases pennies per song – without the risk of piracy.

“It definitely gives the bar operator the ability to make money off the box,” Ernst said.

A productive jukebox in a busy bar can bring in $30 a day in profit, an attractive take for a vending machine.

“The battle was to get the record industry to accept and sign off on this technology. Getting everybody on side was a very big task,” said Ernst.

SML is distributing the units in Western Canada, while TW Gilchrist is handling the East. A key to their popularity may be the capacity of the machines to also play music videos when hooked to a larger screen, Ernst said. o