Making the general public a little safer, one machine at a time 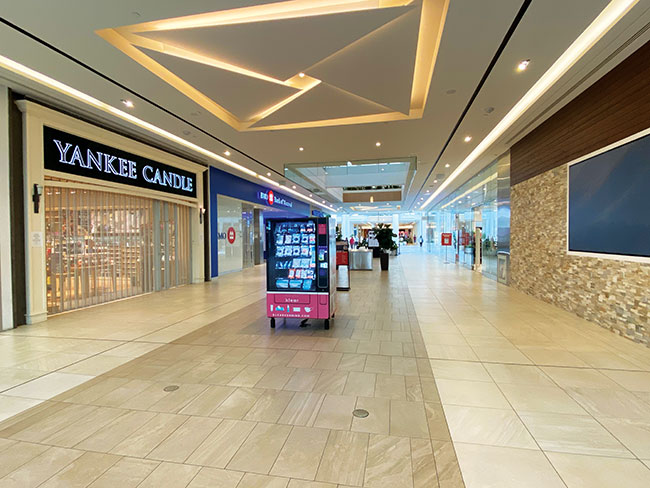 Hazan feels the pandemic is the perfect opportunity for independent shops or start-ups to try retail through automated kiosks to sell their wares.

The vending industry is known as the “convenience industry” for a reason, and these days, it seem even the easiest of chores have presented challenges. For Noam Hazan, a thwarted trip to the grocery store sparked the idea for a PPE vending machine. Having forgotten his mask at home, Hazan was forced to backtrack to fetch it, as no readily available options were seen. The result was Klear vending machines that offer PPE certified masks and travel-sized bottles of hand sanitizers in malls and certain subway stations in Toronto.

“Around the same time my brother sent me an article from the UK, about a UK company who was doing something similar, called Maskey. They were blowing up all over London,” explained Hazan. Inspired by the opportunity to make public health more convenient, he placed a call to Gershon Hurwen of Loyalty Markets Inc.

“He had a few extra machines lying around, so he’s like, ‘why don’t we start with those and see where it goes?’ So we did. We put together a great deck. We spoke to a lot of different kind of landlords people in the commercial real estate industry.”

“People love the idea,” enthused Hazan. “We’ve got a contract with RioCan…we’re doing a pilot with them. And now we just signed a deal with Cadillac Fairview yesterday to do another ten machines as well. We are in talks with a couple of other large operators, facility managers to do some fulfillments in their locations.”

Being an architect by trade helped him both in terms of machine design as well as placement for high-traffic areas. Hazan noted that mall shopping has reduced greatly in the last few years, as more consumers turn to online options. “Malls are going to become these ‘Disneyland’ brands, at least the higher-end malls. And I think now is a great opportunity to get into that industry with automated retail.”

The machines are in an eye-catching, bright pink wrap with the brand name standing out in white. “There’s a whole design element to it there hasn’t really been adopted here, in North America. Generally, Europe and Japan are a bit more advanced in that side from an aesthetic perspective and user experience perspective. I think manufacturers should take it much, much further. And there’s a lot of opportunity to do that.”

Positioned in the doorway by the subway turnstile, the merchandisers are a welcome sight for any commuter caught without PPE and potentially refused a ride. Getting a client’s attention is one thing; sustaining the business model is another.

“I think we can demonstrate that we can help brands adopt this new type of technology; right now we’re not using machines that will enable us to do that, but I think the goal is to eventually start up adopting those machines. That’s the direction we’re going and taking it to the next level using more sophisticated devices. You know, ones that can collect data, and can engage with customers in a new way.” 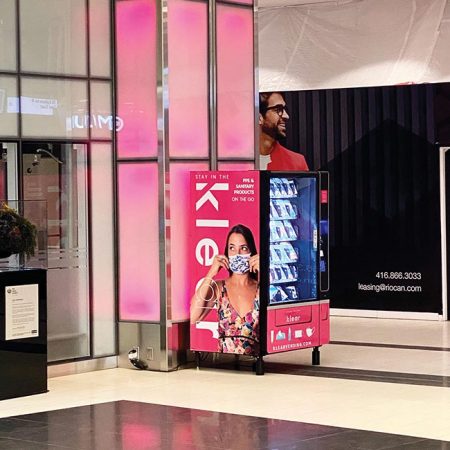 Klear’s interface is touchless; Hazan cites the reasons behind this choice. “Number one, because of COVID there’s a lot of recommendations against using cash. Just the amount of people that touch it, hands and it changes so we were trying to keep you as safe as possible from that perspective. I think, also, as a new business trying to manage cash, the security around collecting cash in different locations, and is quite a high risk. Also there’s more risk of vandalism when there’s cash in the machine.” Klear machines use the Monyx app. Users scan a QR code, select and pay for the items through their smartphones.

At this stage, Klear can be found in two TTC stations in Toronto, as placement is up to each station’s manager. The merchandisers can also be seen in four malls in Ontario, and more of them expanding to western Canada; One is already in place in Mill Woods, Edmonton and another in Calgary. Hazan has plans to see further expansion in the city.

Where does Hazan see the machines in the next five to ten years? “Since SARS has happened, people are much more conscious [of health concerns] because of what they’ve experienced from that pandemic firsthand. Therefore, people are much more conscious about spreading bacteria and things like that, so I think we are going to have them for a while. Yes, I think we’re really safe for the next few years and then we’ll see where it goes.”