Bob Majczyk of Erie, PA placed first with an average score of 431,700 points. He also took home the Single Game High Score title with a score of 470,850 points in one scarily great game. Both wins were earned at The Lager Café in his hometown on a Warner’s touchscreen. Coming in second with an average of 395,910 points was Gina Capello of Warren, PA. Gina plays at Freddy’s in Erie, PA on a Megatouch from Warner’s. 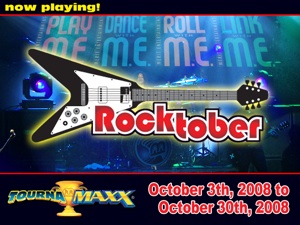 “Tournamaxx is a very effective tool,” said Warner’s Coin Machine Company owner Dave Warner. “It encourages first time customers to play at locations, thereby cementing your relationships with those locations. It’s essentially a video game league and the same revenue boosting principles are in play as in a pool or a dart league.”

“Thanks to everyone who made this year’s Rocktober Tournament one of our best ever,” said Bob Mills, Merit’s Vice President of Sales & Network Business. “Monster Madness is a player favorite. It’s our fantastic games and the support of our operators that make Tournamaxx such a successful Megtouch feature.”

For 30 years, Merit has ensured long-term return on investment for operators by providing continually high-earning equipment along with updates and upgrades for its products. With an installed base of over 250,000 touchscreen games garnering nearly 4.6 billion plays per year, Merit Entertainment is the worldwide leader in touchscreen entertainment devices. Merit Entertainment products appear globally in a wide array of venues and appeal to an almost limitless demographic. Merit continues to expand its position in the industry with ever-increasing entertainment, content, and new games. The company maintains a website with all the latest information at www.meritgames.com.