M&M rolls out its flavour vote, with an international twist 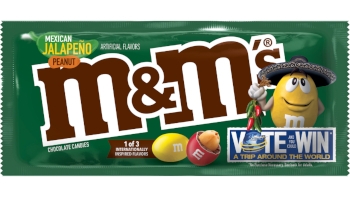 M&M’S® announced the future of its flavours are once again in the hands of Canadians, with the return of M&M’S® Flavour Vote.

The new flavours are available today at select retailers and fans can cast a vote for their favourite once a day until June 24th, 2019.

Last year, marked the launch of M&M’S® Flavour Vote in Canada, resulting in an outpouring of excitement and votes.

Following the popularity of the campaign, M&M’S® are delighted to once again bring the thrill of Flavour Vote back to Canadians with new, exotic flavours from around the world.

Each new M&M’S® flavour is inspired by a different country and coated in milk chocolate. The Mexican Jalapeño Peanut flavour is spicy with a flavourful kick, while English Toffee Peanut incorporates the  flavour of English toffee. Thai Coconut Peanut tempts with the savoury and sweet taste of coconut.

“This year, our flavours were inspired by global flavours, reflecting a growing trend of travel and bold, adventurous flavours. We’re so excited to introduce these new flavours to Canadians and to see how they cast their votes.”

Canadians are encouraged to try all three flavours and cast their vote online, either at FlavourVote.MMS.com or on social media by tagging #VoteMexicanJalapeño, #VoteEnglishToffee or #VoteThaiCoconut.

Each tag counts as one vote. Fans who vote online will have the opportunity to enter the international Flavour Vote contest for a chance to win exciting prizes.

The flavour with the most votes will be announced in August 2019 and will become part of M&M’S® line up, available at stores nationwide for an 18-month period.
For more information, fans can visit M&M’S® brand on Facebook, Instagram or at www.mms.com.

*Social reactions shared via Instagram and Twitter that feature at least one of the official voting hashtags will count as votes.