A piece of vending history is revealed

The other day, as I was going
downtown Montreal and was once again stuck in traffic, my attention was
captured by a black painted advertisement on a brick wall. 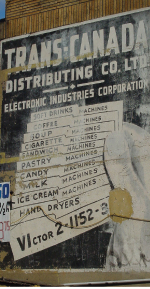 The other day, as I was going downtown Montreal and was once again stuck in traffic, my attention was captured by a black painted advertisement on a brick wall.

That old paint job was on the side of what looked to be an even older building, adjacent to a parking lot. I must have passed there thousands of times before and never noticed it.

Looking at the entire ad, I then realized this was the home of Trans-Canada Distributing Co. Ltd, a Montreal-based large vending operator in the late ’50s and early ’60s. Being quite interested in history already, I wanted to learn more about this ad, this building, and the company.

Working at S.E.M. Inc. I have the pleasure of seeing Gus Robillard quite often. Gus is the former Montreal Coinco branch manager. I thought he must know quite a lot about that company.

Indeed, he knew. However, he suggested I get in touch with Alan Suitor, former CEO of Automatic Products and Montrealer at heart.  So, I sent him an e-mail and what a response I received from him!

Here is what Alan wrote back:

The building in the picture on Park Avenue, Montreal was the old Trans Canada Canteen building. The company was owned by Lou Dettner (his nickname was Puggy) and his partner, Ralph Levine.

Tony Scopeletti was their right-hand man, and one of the best vending mechanics in the industry at that time. André Laurin was also one of their top employees.

André Laurin was a great guy and prior to his death at a young age, in his early fifties, he had his own small vending operation and a campground called T-Pee Camping in Coteau du Lac.

Puggy and Ralph were two of the biggest operators in Montreal in the ’50s and the ’60s. They also owned Eletronic Industries Corporation, which was the Automatic Products distributor in Canada.  They operated and also sold thousands of smoke-shop cigarette machines to the Hudson Bay Company and to Jean Coutu of Laniel Automatique and other operators.

Puggy and Ralph were part of Montreal’s Jewish community, but they were very open-minded and understanding of people of other religions with different language and ethnic backgrounds.

In other words, they were people who could have done business anywhere in the world and thrived.

Both Puggy and Ralph were well-connected, smart business people and hard workers. They sold Trans Canada Canteen to Canteen Corporation of Chicago in the late ’60s or early ’70s.

Most of the negotiations on the acquisition of TCC were done between Puggy Dettner and Patrick O’Malley, a delightful Irishman who was the president and CEO of Canteen Corporation, headquartered in Chicago at that time.

Puggy and Ralph were both very wealthy men when they passed away. They were, without a doubt, self-made multimillionaires.

After Canteen Corporation purchased Trans Canada Canteen, the operation was moved to the south side of the route Transcanadienne just across the road and to the west of Laniel Canada.

Puggy was an interesting individual, who was also a professional lightweight boxer back in the early ’30s. He also owned hotels in downtown Montreal, one of them being Chez Paré, which still exists.

He was married to a beautiful model for many years prior to her death. Several of the big name actors got their start in Montreal at one of Puggy’s hotels: Red Skelton, Dean Martin, Jerry Lewis and many others.

Why did I not notice this ad before? Probably because it was hidden by some sort of billboard.

Anyhow, it sure was a nice surprise, and thanks to Alan, I know a bit more about the history of vending in Montreal.