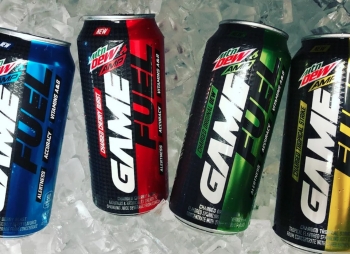 MTN Dew Amp Game Fuel® claims to include ingredients that improve “accuracy and alertness,” and feature a no-slip grip and re-sealable lid.

“Knowing gaming is an endurance sport, we listened to what players have been asking for when it comes to a beverage,” said Erin Chin, senior director, marketing, Mountain Dew in a press release. “MTN Dew Amp Game Fuel is the first-ever drink created specifically for gamers and stands in its own category. It has energy credentials with its vitamin-charged and caffeine-boosted formula, and we can’t wait to share it with the gaming world come January.”

The energy drink scored a Call of Duty World League sponsorship to launch its new product. Taking place between December 7 through to December 9, 2018, players at the upcoming Las Vegas competition will get an exclusive first taste of MTN Dew Amp Game Fuel prior to its 2019 launch.

“MTN Dew Amp Game Fuel shares our vision for growing the audience for esports, and will help us deliver unique experiences for fans at each Call of Duty World League event this season, as well as help create exceptional content for viewers online,” said Brandon Snow, chief revenue officer of Activision Blizzard Esports Leagues, in the same press release. “CWL looks forward to working closely with the MTN Dew Amp Game Fuel team to develop the most exciting season in Call of Duty World League history.”

The energy drink is also expanding its gaming roster with the addition of OpTic Gaming, an industry-defining esports, media and entertainment organization.

Mountain Dew’s newest can was specifically designed to consider how gamers play. The re-sealable lid, created by Xolution, which specializes in innovative packaging solutions, allows for more uninterrupted game play and easy opening. The can’s no-slip grip mirrors the sensory design of accessories and hardware in gaming.