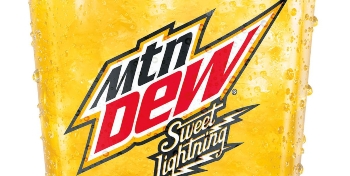 Mountain Dew® and KFC® created a brand character to launch their newest flavour, Sweet Lightning®, a summery, barbecue-friendly flavour of peach with a touch of honey flavouring.

MTN Dew Sweet Lightning is the first exclusive beverage to be offered at KFC. For the PepsiCO company, this is only the second time the brand has partnered with a quick-service restaurant – the first being the hugely successful Baja Blast which debuted at KFC’s sister restaurant, Taco Bell, nearly a decade-and-a-half ago.

“Like KFC, MTN Dew is inspired by bold ideas and flavours, making this an authentic relationship from the start,” said Nicole Portwood, vice president of marketing, MTN Dew in a press release. “To come together on an exclusive product – Sweet Lightning – is a thrill, and we look forward to delighting our customers’ taste buds and pushing the envelope on creativity.”

Sweet Lightning was developed in partnership with the food and beverage innovation experts at KFC and MTN Dew to pair with, and complement the taste of Original Recipe fried chicken.

“With the addition of Sweet Lightning, we now have a drink that is as unique to KFC as the Colonel’s secret blend of 11 herbs and spices,” said Andrea Zahumensky, chief marketing officer, KFC U.S. in the same press release. “And like our world-famous fried chicken, Sweet Lightning will keep fans coming back for more.”

MTN Dew’s Sweet Lightning™ will be on permanent pour at KFC locations nationwide. The beverage joins a list of refreshing PepsiCo drinks already available at KFC.