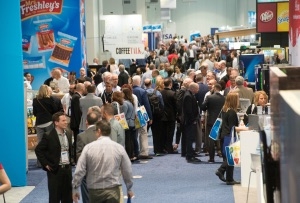 “The industry came together in force for this year’s dynamic NAMA show, with more than 4,400 attendees and 313 exhibiting companies,” said Lindsey Nelson, vice president of programs and services, in a press release.

The 2018 NAMA Show presented its most comprehensive educational line-up in the show’s history, doubling the number of breakout sessions offered in 2017. Education kicked off with three pre-conference sessions on micro markets, leading sales strategies, and operating a successful convenience services business. Pre-conference programs also included a workshop developed by the National Association of Blind Merchants (NABM) regarding the Randolph Sheppard Act.

Five highly customized tracks of education were offered for more than 1,800 participants. Included in the line-up was a customized program for alumni of NAMA’s Executive Development Program (EDP), and a 75-minute sales session for small operators.

“Building on the success and momentum of an exciting week, The NAMA Show exhibitor community donated more than 16,690 pounds of food – the equivalent of 13,900 meals – to Three Square, a Nevada food bank. Many thanks to our exhibitors for giving back to the local community,” Nelson said.  “The NAMA team would like to extend a huge thank you to all who helped make The NAMA Show a success,” Nelson concluded.

Founded in 1936, NAMA is the association representing the U.S. convenience services industry. With more than 1,000 member companies, including many of the world’s most recognized brands, NAMA provides advocacy, education and research for its membership. A selection of education downloads are available on the show website: http://thenamashow.org/speakers-handouts. NAMA will return to Las Vegas on April 24 – 26, 2019.