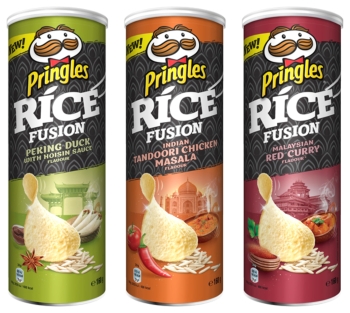 Pringles will launch its first big change in four years, with a new rice based crisp to carry eastern-inspired flavours.

Pringles Rice Fusion will be the first flavour and ingredient change for the brand since Pringles Tortilla, which became the biggest launch in the chips category in 2015.

Based on insight that 53 per cent of chips buyers are prompted to buy more when they see new flavours – and Pringles shoppers buy the most varieties of crisp – the Rice Fusion range will bring three new flavours to the crisp category: Malaysian Red Curry, Indian Tandoori Chicken Masala and Peking Duck with Hoisin Sauce.

Rice Fusion chips promises to have a lighter texture, with less saturated fat and less salt than traditional Pringles.