News
No Novelty In Genesis

This year marks Crane Co.’s 150th year – over 75 years for Crane
National Vendors – but they’re not marking 2005 with a celebration of
years past, they’re calling this one a genesis.

This year marks Crane Co.’s 150th year – over 75 years for Crane National Vendors – but they’re not marking 2005 with a celebration of years past, they’re calling this one a genesis.

On July 12 Crane kicked off their Sixth Annual Customer Appreciation Golf Tournament with a “Tools for Growth” seminar where they revealed their newest machine, the Genesis tabletop coffee machine.

Steve Harkins, director of sales and marketing for Crane in Canada, offered some fresh ideas and operating techniques in conjunction with existing and new products, and delivered some important commentary on the state of the vending industry.

In a market that has been in such decline, vending manufacturers are controlling costs by avoiding new product development, said Harkins. Crane’s reaction is a focus on bringing new equipment development concepts driven by innovation.

The industry can only react to competitive pressures with relevant technologies, he suggested.
“Gimmickry and gadgetry for the sake of the novelty of these things has not been incorporated into our designs and will not be in the future,” the Crane representative stated emphatically. 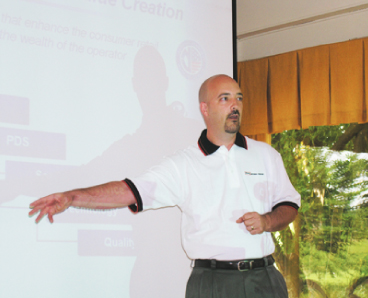 By only adding features and enhancements that directly add capability for operators to increase revenue, the company has updated machines like the Hot Drink Centre 2 to address consumers’ misconceptions.
Competitors like Tim Horton’s and convenience stores with elaborate coffee service are competing for the same consumer in the out-of-home market. They have better coffee in terms of the public’s perception, more variety, and larger sizes.

“There is a fundamental lack of parody in terms of the vended coffee consumer proposition,” explained Harkins.

What people are coming to expect in the out-of-home market is not available in vending. Take cup sizes, for example. While the menu set in places like Tim Horton’s starts at 12 oz. for a small and up to 20 oz. for a large, vending starts at 8 1/4 oz. and only goes up to 12 oz. This limits how much operators can charge.

The redesigned Hot Drink Centre 2 allows for larger cup sizes – and not by simply adding a shot of hot water, like some others, Harkins reminded. Crane recognizes coffee is a subjective beverage, so they measure taste quality by measuring total dissolved solids in the beverage.

Which category of vending operators choose may also be a question of subjective taste. Harkins reminded that although fresh food vending is “the category that everybody loves to hate,” it still remains a key differentiator for operators to secure new large-scale business.

The flexibility of vending machines is something operators need to capitalize on. The Refreshment Centre 1, for example, is a fundamentally flexible machine – it can basically vend any product at any temperature.

“We continue to believe there is an under-utilization of the possibility for the machine to add value to your business,” Harkins remarked.

“The service industry is up by 8.6 million jobs, so these are the people we’re trying to reach.”

The trend is not as dramatic in Canada, but here only 25 per cent of the workforce is employed in the goods producing sector, explained Harkins.

In the service sector, trends like gourmet coffee houses are increasing. Crane responded with the new Genesis Coffee and Espresso machine.

Harkins suggested there is a grey area between vending and OCS. The new Genesis machine, coming to market in the first quarter of next year, “has a lot of features that that are akin to single cup and OCS that are also akin to vending in terms of controlling cup, condiments and having automated suspense.”

The Genesis features an LCD screen with a build-a-drink interface, where consumers make a selection and choose condiments. Its CoEx Brewer offers up to ten selections, with any array of blending within the canisters and can prepare under pressure for a truly brewed espresso.

Espresso based drinks are a growing category and beverages from the new Genesis, “rival what you get at Starbucks or The Second Cup,” said Harkins.

In the end, vending can only combat these competitors with “relevant technologies” and those that will live up to the expectations of the non-traditional vending account.

With new accounts, new machines, and new perceptions, it’s a seemingly new world of vending; one might even call a genesis.