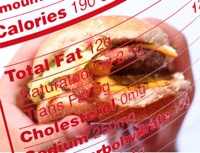 In a move to help combat obesity, Ontario's doctors are calling for calorie counts to be shown prominently on chain restaurant and school cafeteria menus and menu boards province-wide. The Ontario Medical Association (OMA) says that by revealing the caloric content of fast foods, consumers will be better equipped with the information they need to make healthier choices.

"People lead busy lives and it's not always convenient to prepare food at home," said Dr. Ken Arnold, President of the OMA. "Ontario's doctors are not telling people what they can and can't eat, but when you do eat out, you should know how many calories you are consuming."

The OMA wants to see:
– Early action on menu labelling from leaders in the restaurant field.
– The provincial government enact legislation that would require calorie contents to be listed adjacent to the items on menus and menu boards at chain restaurants and school cafeterias across the province.
– An education campaign to help inform Ontarians about the impact of caloric intake on weight gain and obesity.

The OMA is focussing on labelling calories due to common misconceptions surrounding the caloric content of many chain restaurant meals. An OMA policy paper entitled An Ounce of Prevention or a Ton of Trouble shows that most people consume more food than they are aware of and that they do not keep track of caloric intake.

"We're hoping that when consumers see calories posted while ordering they may choose to order something lower in calories, or eat higher calorie meals less often," said Dr. Yoni Freedhoff, Medical Director at the Bariatric Medical Institute in Ottawa.


A new OMA report, Treatment of Childhood Overweight and Obesity, highlights the increasing epidemic of childhood obesity and the need for action. It shows that:
– A quarter of children are obese, almost half are inactive and television and computer screen time is their pastime of choice.
– There is evidence linking type 2 diabetes, prediabetes, non-alcoholic fatty liver disease, certain types of sleep apnea and the development of chronic kidney disease later in life to children who are overweight or obese.
– Over 75% of obese children become obese adults.
– Overall, the health impacts of overweight and obesity are estimated to cost Ontario $2.2 to $2.5 billion per year.

Ontario's doctors want to see menu labelling enacted to help parents and children make informed choices about the foods they eat. A recent survey by the OMA shows that over 80 per cent of Ontarians support such an initiative. "As physicians, we know that Ontarians want to lead healthier lives," said Dr. Arnold. "Ultimately, knowing and understanding calorie intake can help patients make healthy choices for themselves and that's empowering."

The Problem
– According to the 2005 OMA report An Ounce of Prevention or a Ton of Trouble, we may be raising the first generation of children who will not outlive their parents.
– The report also shows that almost 60 per cent of Canadian adults are overweight or obese.
– A study by the New York City Department of Health found that most consumers underestimate calorie content – sometimes by more than half.
– A recent study out of Yale University observed 4,311 people at a handful of fast food restaurants that did not have calories listed on menus. Of this group, only six, or 0.1 per cent, looked at the
nutrition information provided in the form of a poster, in a pamphlet or on a special touch-screen computer.
– According to the Canadian Council of Food and Nutrition, 62 per cent of Canadians eat lunch/dinner out at least once per week.

Menu Labelling in Other Jurisdictions
– In July 2008, a New York City (NYC) law came into effect mandating caloric menu labelling in chain restaurants with more than 15 locations nationally.
– The law requires that calories must be posted prominently on menu boards and menus, per menu item and for combo meals.
– A California law will soon be implemented and national legislation has been introduced in the U.S. but not yet passed.
– Many chain restaurants across the U.S. are acting to voluntarily provide some additional menu labelling information.

Why chain restaurants?
– As a whole, they serve food clearly associated with high calorie intake and obesity.
– Chains have standardized preparation and portion sizes which make the provision of accurate calorie information more feasible.
– Menus and menu boards in chain restaurants are already often changed for marketing purposes.