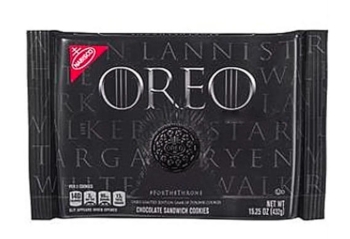 Image courtesy of Mondelez and Oreo

Game of Thrones Oreos will be Mondelez’s largest limited-release to date according to the Oreo brand.

The flavour palate remains the classic vanilla filling between two dark chocolate wafers, unlike Oreo’s past experiments with flavour. The cookies are embossed with the sigils of three of the many royal families: Targaryen, Lannister, Stark and one for the Night King.

Oreo’s marketing department are clearly fans of the Night’s Watch: The company asks its fan to “pledge their fealty for House Lannister, House Targaryen, House Stark or The Night King by visiting oreo.com and OREO’s Facebook and Twitter – using #GameofCookies and #ForTheThrone.

Oreo will surprise select fans throughout the season with a special treat for participating.”