Most of us remember peanut butter as a common lunchtime staple. PB and
Jelly sandwiches may not have been culinary classics, but they always
hit the spot and they certainly weren’t anything to be feared.
Nowadays, however, you’d be hard pressed to find a trace of peanut, let
alone a peanut butter sandwich, in any grade school setting. 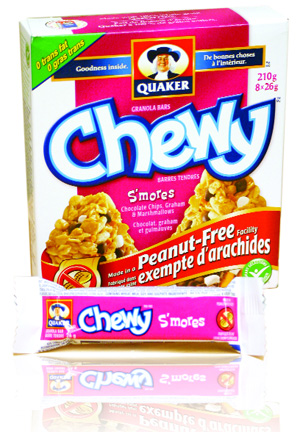 Most of us remember peanut butter as a common lunchtime staple. PB and Jelly sandwiches may not have been culinary classics, but they always hit the spot and they certainly weren’t anything to be feared. Nowadays, however, you’d be hard pressed to find a trace of peanut, let alone a peanut butter sandwich, in any grade school setting.

Peanut allergies have become increasingly common among children over the past decade. As a result, new pressures have been placed on school boards to develop policies that meet the needs of children with this potentially life-threatening allergy.

Parents are also faced with a new challenge. Sourcing school snacks to send with the kids is becoming the job of a regular sleuth. Traditional lunchtime snacks – granola bars, chocolate bars, any goods with even a trace of nuts – are now “peanuts non grata.”

The latest publicity surrounding Effem Canada’s now peanut-free Mars bar has left vending product suppliers fielding questions left and right from operators curious about the impact this will have on the industry.

Government agencies, particularly school boards often influence overall food policies in Canada. According to Paul Duchesne, media relations officer for Health Canada, the reason school boards have been forced into a whole new level of hyper-awareness is because even microscopic amounts of the peanut allergen can be fatal in certain individuals. Food policies have been altered for hundreds of kids to accommodate only a few, and in some cases none at all.

Some might call it paranoia. But whether it’s warranted or not, “peanut phobia” is very real in Canada and it’s something that’s no longer confined to the elementary schools. And that means it’s an issue vending operators should pay very close attention to.

Some Canadian municipalities are starting to demand that the vending machines in their public buildings offer peanut-free products. Vending operators have the option of taking a reactive approach to this new challenge and waiting for the inevitable; or choosing the proactive route and becoming informed ingredient detectives.

There’s a lot to know about peanuts – one of the nine most common food allergens – and their tendency to pop up even in the most unexpected places. As a foodservice operator, being able to identify these potential hazards and interpret food labels is critical.

The layperson may not realize that terms like hydrolysed vegetable protein may indicate the presence of peanuts, but as the Canadian School Board’s Anaphylaxis handbook says, families of anaphylactic children must learn these and other codes that indicate the presence of potentially deadly allergens. Foodservice operators should do the same if they’re going to guarantee a client a peanut-free environment.

According to Duchesne, Canadian Food and Drug Regulations require that most pre-packaged foods carry a label with the ingredients listed in decreasing order of proportion. Nevertheless, some ingredients and substances used in the manufacturing of food products are exempted from these lists.

For years, consumers have come to accept the statement “may contain traces of peanuts” to mean, in essence, “eat at your own risk.” Claims like these, which are meant to protect the manufacturer, often end up confusing the consumer.

With its proposed amendments, Health Canada is hoping to allow food manufacturers who qualify to make clearer, less ambiguous statements. Ones consumers and foodservice operators alike can trust.

In the meantime, it’s important to note that currently there is no standard or official policy regarding allergen control procedures in the food industry. Duchesne says Health Canada’s most pertinent advice for both consumers and foodservice operators is to read labels carefully. And although there’s a certain level of accountability required on both sides, consumers ultimately rely on the food industry to take responsibility for their protection and to minimize the risks associated with food safety.

So what about all the “peanut-free” labels we’re seeing on vendable products lately? These labels indicate that the food has indeed been manufactured in a peanut-free facility, however, operators should note that no one logo has been issued by Health Canada. This means that even though a label says “peanut-free,” operators should still be careful to check the ingredient list. Some children are allergic to other nuts, such as tree nuts, which are banned in many Canadian schools but are not necessarily considered a risk by some food manufacturers.

The most important thing a vending operator can do is ask the client for a list of the banned ingredients and to dutifully adhere to it.

Duchesne also said Health Canada has not set any specific regulations for advertising “peanut-free” products on or around a vending machine. This doesn’t mean the machine is fair game, however. The client should always be consulted before advertising peanut-free or allergen controlled products.

According to industry experts, Canadian vending operators are especially looking for peanut-free products to offer in schools and arenas. The most common request has been for bars, namely health food bars and chocolate bars.

Thankfully, major Canadian food manufacturers have been paying attention to this growing issue. Most recently, Effem Canada has re-launched the peanut-free Mars bar in a series of national television commercials. Quaker has also hit the small screen with commercials touting their now Peanut-Free Chewy Bars.

Quaker, like many other food manufacturers has developed their own easy-to-recognize peanut-free label using kid-friendly colours and graphics. Dare Foods in Quebec is also making snacking safer with their line of peanut-free Bear Paws, Wagon Wheels, and Real Fruit Gummies.

Others, like Quebec’s Krispy Kernels have had their line of Axess products certified by a third-party certification program called, Certified Allergen Control. The CAC logo with a “thumbs-up” for safety demonstrates the product has undergone tests to detect the presence of the peanut allergen. The CAC program, which is recognized by Health Canada, was developed by the Quebec Food Allergen Association and others from the food industry.

The CAC is careful to point out that current scientific knowledge cannot guarantee the total absence of allergens in processed foods. Therefore, there is always a degree of uncertainty, a margin for error. In other words, zero risk does not exist. They say it’s impossible to declare a product peanut-“free,” and decided to use the term “optimal control of peanut presence” instead.

In 2002, Nestle Canada met with widespread criticism from the public when it announced the closing of its peanut/nut-free facility. Since then, the company has been working to increase the quality of its allergen control process … Nestle Canada re-opened the facility in 2006 and is now offering individually wrapped snack size Smarties, Kit Kat, Aero and Coffee Crisps bars peanut-free. The company has not stated whether it intends to offer these favourites, known as Nestle’s “Big Four” in their larger, vendable sizes. However, vending insiders indicate the company is rumoured to have such plans in the works.

The eagerness of suppliers to respond to growing concerns about peanut allergies is an indication of the Canadian food industry’s commitment to food safety. Vending operators can continue this promise to the end-user by committing to an increased level of food safety awareness.

Reading labels, doing the homework and staying in constant communication with clients can help operators increase their level of service and make their own food safety guarantees.o