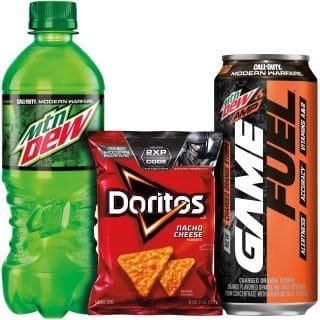 As part of the groundbreaking program, players will be able to unlock in-game rewards inside Modern Warfare with the purchase of any participating MTN DEW Amp Game Fuel, MTN Dew or Doritos products, by entering unique codes found on the packaging.

The excitement kicked off on Sept. 14 with a live-streamed, competitive event – the MTN Dew Amp Game Fuel Pro-am. This special pre-release exhibition paired gaming professionals with celebrities in an adrenaline-inducing experience that highlights the new 2v2 game mode in Call of Duty: Modern Warfare.

“We’re thrilled to join forces with Activision just ahead of the hugely anticipated Call of Duty: Modern Warfare release,” said Erin Chin, Senior Director, Marketing, Mountain Dew and MTN Dew Amp Game Fuel in a press release. “We put a stake in the ground when we launched Game Fuel last year, and we’re excited to continue delivering one-of-a-kind experiences, like this month’s PRO-AM with Modern Warfare – sure to be one of the most exciting games of the year.”

“This dynamic collaboration is a best-in-class example of the power of PepsiCo’s food and beverage portfolio coming to life for consumers on one of the world’s largest stages,” said Leslie Vesper, Senior Director, Marketing, Doritos. “Doritos and DEW are known for providing players with unique ways to access exclusive gaming experiences, and now we’re taking this to a new level by working closely with Activision for Modern Warfare.”

Published by Activision and developed by Infinity Ward, Call of Duty: Modern Warfare is scheduled for global release Oct. 25. The game delivers an epic re-imagining of one of the most iconic and thrilling video game properties in history, Modern Warfare.