Eightball aficionados are looking to a high-speed

LAS VEGAS – Eightball aficionados are looking to a high-speed solution to bring greater interest to their industry. 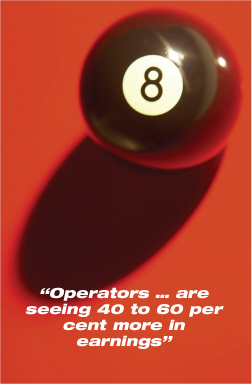 LAS VEGAS – Eightball aficionados are looking to a high-speed solution to bring greater interest to their industry.

At the 25th anniversary celebration of the Valley National Eightball Association’s annual world championships, the biggest push for poolroom operators was on expanding their offerings to include speed pool.
Perhaps one of the most exciting offers in the game today, speed pool differs dramatically from the more defensive game players have migrated towards.

“Speed pool is not only an excellent income generator for the location, but it adds a new level of excitement,” Valley-Dynamo’s Dave Courington told Canadian Vending. “It attracts attention, fuels a person’s competitiveness and brightens up the location.”

“As pool players have changed over the years, they no longer play so much to win. The game is now more defensive – which is good for the player, but kind of boring to watch,” Courington said.

“The general public wants excitement. Speed pool can bring interest back to the game.”

Courington made the analogy to the current hype surrounding poker. He said that Texas Hold ‘Em is one of the least exciting card games going, but celebrity attention and the televised matches of the World Poker Tour have drawn players in.

“Speed pool can bring that excitement back. It can bring interest back to the game. If we can get the attention, everyone will win.”

Good for the players, sure. But what about the business side?

Courington said in past, the operators and location owners couldn’t really use the table to market the location. With Valley’s newest offering, the Great 8 – and its collection of technological enhancements – now the table becomes the marketing tool.

The biggest advantage to the new table and its correlation to speed pool is the built-in timer, an enhanced coin mechanism and bill acceptor. Courington points to the last as one of the big sellers for operators trying to get a new table into a location. Now poolroom and bar staff can focus on doing what they do best – serving food and drinks – instead of spending time making change for players.

And with current results in hand, he’s confident operators will see even greater rewards.

“What we’ve seen so far, is operators that have put it in are seeing 40 to 60 per cent more in earnings.”

Part of this is dependent on smart pricing strategies. Courington said the threshold has been a higher price for single play, and breaks for frequent play. In the Canadian market, he said a number of operators have found $2 per single play or five for $5 has been well received.

The only downside, he agreed, was the frequent changes in Canadian currency design – a frustration shared across the coin-op and vending industries.

As for the annual championship – this year featuring renowned speed pool world champion Pearson – the VNEA doubled the prize pool from last year.

Executive director Gregg Elliott said the committee recognized the opportunity to expand the speed pool aspect of the game, and in keeping with the theme, offered a Bayliner speedboat as the grand prize for the speed pool tournament.

Pearson said that each player in the tournament finals received four attempts to get the fastest time. Prior to the final round, the best qualifying time was 55 seconds. Courington said the best time in state qualifying rounds was 28 seconds, but only one player out of 13 qualifiers in the state finals was the fastest in qualifying for the final round at Las Vegas.

“Anyone has a chance to win,” said Elliott.