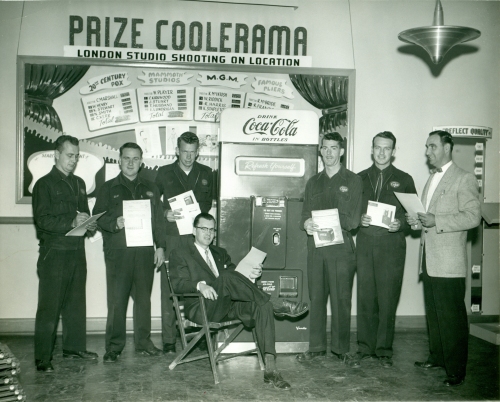 When Dan Stewart started at Savco in 1975 the business was owned by his father, Ken Stewart, seen here, second from the right, during his days as a rep for Coca-Cola in London.

May 8, 2015 – The Stewart family is synonymous with Savco Food Services Ltd., a small company that, over 53 years, has built an enviable reputation for high-quality service you’d expect from a small-town business.

May 8, 2015 – The Stewart family is synonymous with Savco Food Services Ltd., a small company that, over 53 years, has built an enviable reputation for high-quality service you’d expect from a small-town business.

Point Edward, Ont., the company’s home base, is a village of about 2,700 right under the bridge to the United States near Sarnia.

The company has served many sectors – industry and business being its biggest customers – but also sports arenas, seasonal outlets and snack vending in high schools.

Savco’s offerings started in 1961 with cold beverages, then progressed to snacks, coffee and fresh food. When its vending clients wanted to offer coffee service, the company expanded to meet that demand.

In the 1970s, they addressed the lack of a reliable food supplier by opening in-house kitchens where they could prepare their own food. From there sprang corporate catering business. The catering and the kitchens went together in terms of inventory, staff and production, says Stewart. But the recent economic downturn prompted a decision to close the kitchens and bring in food items from an outside source. The market for corporate catering had shrunk as corporations scaled back and began spending less money.

The company now offers more variety, says Stewart, because it is buying and having packaging done on a larger scale.

When Stewart started at Savco in 1975 the business was owned by his father, Ken Stewart.

Ken worked for Coca-Cola in London, Ont., in the 1960s, first as a driver, then as a representative in Toronto’s corporate office. In those days, only the major cities had corporate plants and the smaller centres were franchises, says Stewart. His father travelled around the province calling on some of those franchises, and one of those businesses was in Sarnia.

The Sarnia franchise, established in 1961, was one of many plants that bottled on site in the 1960s. Its owner hired Ken as general manager.

For a time, Ken was running two companies: the Coca-Cola operation in Sarnia and a small vending company he had purchased with its owner in 1966. That small company was the Sarnia Automatic Vending Company, known as Savco, in 1966.

In 1974, the Sarnia franchise was sold to Coca-Cola, which around that time had been buying out the franchises. When his partner retired, Ken bought out his share of Savco and ran the business full time.

Dan worked at the business during summers as a high school student. After high school he worked full time at the business covering various routes for a couple of years, travelled for a couple of years, then in 1975 started working full time at his father’s business and, in his words, “settled down a bit.”Around that time, he says, Savco had a Kitchener office and when he came back from travelling he managed that route. He then came back to Sarnia and did service work. His entry into service work was very much on-the-job training, he says, because the company’s service technician at the time had to be off for a year to recover from back surgery.

“I was coming back to fill his shoes,” he says. “I had some experience, and I’m pretty hands-on, so I just figured it out as I went.”

Stewart assumed management of the company in 1983, and he became sole shareholder in 1990 when his father retired. Having spent 39 years in the business, Stewart has seen a lot of changes in the industry.

The industry is rather young, he says. “In those early days, people didn’t have vending machines. It was a new thing in the 1960s and ’70s. It seemed easy to say to them, ‘we’ll put these things in, and it won’t cost you much and maybe you’ll make a little money by offering a convenience for your employees.’

“There is more competition now in the sense of fast-food restaurants and drive-thru windows and coffee shops. There are just so many more choices today than there were way back when.”

It’s all about convenience, he says of the vending business. If you’re an employer and you find your employees are leaving to get something to eat, giving them access to machines can save you time and promote efficiency. Above all, he says, it’s good for morale for employers to have refreshments available to their staff: “You work better, you think better when you’re hydrated and nourished.”

Through the years, the company has had to undertake a slow adaptation to technology, says Stewart. Across the industry, there is so much more out there for people and they are much more mobile, he adds.

“The biggest challenge we face is the cashless payment issue, where people just aren’t carrying around cash in their pocket.”

Although reliable technology exists, he says, it still is not financially viable for most operators or most areas.

“I’m waiting for the time when it makes sense and the technology is affordable. You have to buy the equipment, you have to put every machine online, usually with a cellular modem. There’s a fee for that – the fee for the merchant account and the credit card fees. And when you’re selling smaller items, it’s a little different from selling a big-ticket item.”

Despite the challenges of burgeoning customer choices and greater customer mobility, the company’s desire to provide good service, to innovate and to stay ahead of the curve has not changed, says Stewart. People continue to want reliable access to fresh items, he says.

No doubt this attitude and his active involvement with the Canadian Automatic Merchandising Association has led to Stewart receiving some serious vending industry hardware.

In 2004 he was given the Don Storey Memorial Award and in 2013 the Stuart Daw Gold Service Award, the vending and office coffee service industries’ highest honours. (See this CAMA video honouring Dan. )

The modest businessman has an impressive record of service with CAMA. With some prompting, he details a decade of association activities that, along with many successful years as an operator, led to these honours.

He began active involvement with CAMA in 1994 when he was asked to stand for election as Ontario regional president and served a two-year term. In 1995 sat on the CAMA expo committee. That year he also was a member of the coinage committee, a group charged with working with the Mint and the federal government with respect to the $2 and plated coin initiatives. The committee negotiated with the Mint on technical and practical matters regarding the coins’ development.

In 1996 Stewart began a two-year term as vice-president, and in 1997 he chaired the expo in Ottawa. “That was really interesting,” he says. CAMA worked with the Mint to do a special tour – one that went “above and beyond what the public would see of the facilities.” The tour represented the association’s involvement with the Mint and its focus on improving that relationship. The committee sold tickets to a Senators hockey game at the Palladium (now the Canadian Tire Centre) in nearby Kanata and paid a special tribute to Alan King, founder of Vend King, he recalls.

In 1998 King was elected national president and served a two-year period, during which time he helped point out security concerns – they wanted to avoid counterfeiting. Mint and government listened to the committee. This resulted in the development of a patented coating process, which would send a unique and secure signal that would be recognized by the coin changer. The committee helped with the implementation.

Because the vending operators got nothing out of the change in coin currency and in fact were at a competitive disadvantage, he says, CAMA sought compensation to offset the estimated cost of about $85 million.

“We mounted quite a campaign,” he says – live radio, television, meetings with different ministers. In the end, they didn’t get the financial compensation but he feels they generated some good public relations through the process. The public was not aware of the industry’s challenges, he says. “We were successful in raising the profile of vending and set the tone for the Mint to consider the industry much more.”

“It’s been very rewarding,” he says. “I’ve met a lot of great people with whom I remain friends, and I’ve learned a lot.

He urges young people entering the vending business to work hard and to make profits “niche by niche” or “quarter by quarter.” Being versatile is especially important in a small business, as is being aware of technology and being a “people person.”

Vending has its challenges, he says, but is a good business to get into. “Good paying factory jobs we often served are diminishing. Our traditional customer base has diminished.”

However, the office coffee side of the business is thriving. People seem to appreciate a good cup of coffee more than ever, he notes.

What’s more, the company recently opened a showroom in the former kitchen space it is renovating to display point-of-use water systems (filter instead of bottles) and sell retail products such as coffee, tea, brewing equipment and accessories.

Stewart is optimistic about vending industry prospects: “I think there will always be a place for good-quality food service for business and industry.